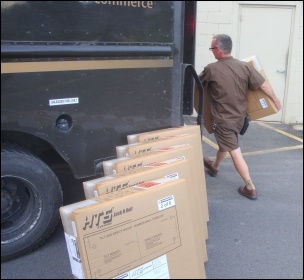 Unite the Union members employed by UPS parcels in Camden, London, have won a tremendous victory in a long running battle against bullying and racism.

The company has a business model which forces drivers to work overtime using bullying tactics such as sending messages out to drivers who are out on route, demanding that they finish delivering all packages before returning to the depot - and threatening disciplinary action if this condition is not met.

The workers who load the vans work under Victorian conditions, with tremendous pressure to load vans as quickly as possible - reporting that they have even been fed high sugar energy drinks to keep them going through the night shift.

These workers have complained in particular of racism and bullying over a long period, but have felt too intimidated and afraid of victimisation to follow complaints through.

Negotiations have taken place since February at Acas which followed a consultation ballot where members expressed a clear desire for a strike ballot. Progress was slow and stalled and the reps finally had enough and called for an official strike ballot, which returned a 85% yes vote, but on a small turnout.

Once news of the ballot got out around the country, reps in other depots expressed concern about action taking place, because of the low turnout. They also expressed fear that the company would withdraw from the recognition agreement.

However, the courageous reps at Camden took the view that a recognition agreement is only as good as the results it delivers. They therefore pressed for notice of strike action to be issued without delay, which the union did, setting the 7th and 9th December as strike days.

Once again reps outside of Camden expressed concern, this time in strong and sometimes insulting terms - again expressing more concern for the recognition agreement than for day-to-day conditions. However, events proved the Camden reps right.

Following the issue of notice for strike action, which would have coincided with the December peak season, the employer started serious talks. Within the space of four days more was achieved by local reps than had been achieved by national negotiations for nearly a year.
An agreement was signed that led to the strike being called off only after the local reps were satisfied that issues had been addressed.

The multi-issue agreement includes measures to start dealing with racism but also includes a proposal that will mean drivers no longer being bullied to work forced overtime. This is a huge step - the UPS business model relies on forced overtime.

Unsurprisingly, those reps who were critical of Camden now wish to see this rolled out across other depots. The Unite response must be to support depots outside of Camden who now have the confidence to fight too.

But there are also clear lessons. This campaign was won despite a very low turnout in a ballot, emphasising again how important it is for the trade union movement to fight measures aimed at restricting the ability of workers to take strike action following a yes vote.

It is of course vital that work is done to maximise turnouts in ballots. But equally, there are plenty of campaigns that grow from low turnouts and win important victories.

This version of this article was first posted on the Socialist Party website on 8 December 2016 and may vary slightly from the version subsequently printed in The Socialist.