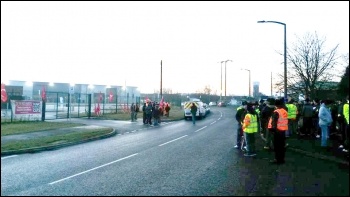 130 members of the Unite trade union working at the Doncaster waste transfer depot are on strike today, Monday 12 December, over a 'draconian' management style and the victimisation and sacking of two colleagues.

The one-day stoppage by the refuse and recycling workers, who are employed by Sita UK Limited which now trades as Suez Environment, followed a massive 98% vote in favour of strike action on a turnout of 94%.

Workers have grown angry over management's increasingly hardline attitude resulting in workers not being allowed to take any holidays since August and they report that there have been a number of 'trumped up' unfair dismissals, which they fear is a prelude to potential redundancies.

One sacked worker, a Unite member, who previously won a company health and safety award, has been sacked for a supposed health and safety breach. His appeal is on Wednesday this week and if he's not reinstated then more industrial action will follow.

At least 100 strikers were on the picket line from 6am and nothing went in or came out. The strike is solid and a union steward said: "Job done for today but if he doesn't win his appeal we'll be back out". 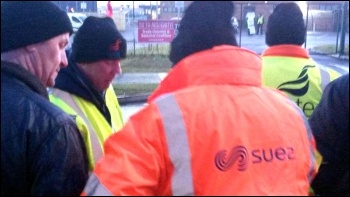 Workers said that managers had got so ridiculous that they were hiding in hedges to take photographs of workers doing their bin rounds! They are being pushed to work longer hours to the point where one worker had to pee in a bottle at the back of the bin wagon.

"We had hoped that we could have avoided a strike and the inevitable disruption it will bring, through recent talks at the conciliation service Acas.

"Sadly management was not willing to listen and instead seems hell bent on continuing with its bullying 'draconian' management style and denying people taking time off to go on holiday with their family.

"The bullying mentality of management cannot be allowed to fester. We urge the company to get around the negotiating table to meaningfully negotiate a solution which meets our members' concerns and restores dignity and respect to the workplace."

This version of this article was first posted on the Socialist Party website on 12 December 2016 and may vary slightly from the version subsequently printed in The Socialist.