Deaths and comebacks - 2016 sounds for your stocking 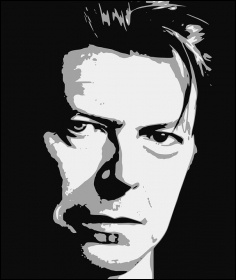 The political tremors of 2016 stretched into music with multiple deaths of well-loved figures. Thousands of people singing Starman in Brixton after the death of David Bowie will remain in the memory. Similar scenes were witnessed in the US on the demise of Prince.

Their back catalogues will become Christmas presents for many, as will those of Leonard Cohen, Prince Buster, Fairport Convention's Dave Swarbrick and The Eagles' Glenn Frey.

But there was a wonderful array of new music in 2016.

A Tribe Called Quest heralded a return with the excellent We Got It From Here... also tinged with tragedy as band member Phife Dawg died during recording. Standout track is We The People whose point is clear:

All you Black folks, you must go

All you Mexicans, you must go

And all you poor folks, you must go

Muslims and gays, boy, we hate your ways

So all you bad folks, you must go

Hip hop and R&B hit a purple patch. Kano deservedly won the Mobo best album for Made In The Manor - a modern-day homage to east London. Anderson.Paak, Kendrick Lamaar and Kaytranada also hit the spot.

Kate Tempest's Let Them Eat Chaos is part of a new London sound along with Ray BLK - one of my tips for 2017. Her mini album Durt is a downloadable steal at a fiver.

My favourite is Black Focus by Yussef Kamaal, another London sound of jazz, grime and broken beat.

Finally, a leftfield offering: Wreck His Days' Tomorrow The Rain Will Fall Upwards, a dub/ambient collection, features a reworking of Spanish Civil War song Ay Carmela, a track dedicated to revolutionaries Rosa Luxemburg and Alexandra Kollontai and strains of The Internationale to close out the album.