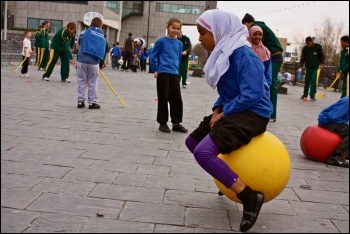 Labour authorities often claim that their cuts are kinder than the Tories'. But what could be worse than Hackney Labour council trying to slash in half the small but vital Early Years part of the Inclusion and Specialist Support Team?

The present team of just three specialist teachers and six nursery officers is already struggling to cope with nearly 700 children and their families in 118 nurseries and Early Years settings across the borough. And this is a borough where other cuts and social deprivation already mean a growing number of children who need extra support.

This angry team of workers in the NUT and in Unison, has taken strike action to say no to the cuts. The Higher Needs Budget, which pays for this service, is not even being cut. Other departments that are due for cuts, such as the 12 advisory teachers who work inside the Learning Trust office, are actually taking on staff!

Their action on 30th March, which included visiting every one of the pre-school establishments across the borough, is the beginning of a fight to the end.

At the lunchtime rally outside the Town Hall one of the strikers spoke to Brian Debus, chair of Hackney Unison:

"We visited 30 settings this morning and got a very positive response from parents who said they had not been told about our strike. Some teachers on strike at Parkwood School today over cuts are here with us and parents have come along to support us. They know these cuts would have a big impact on the children's future and they support us fighting against them all the way!".

This version of this article was first posted on the Socialist Party website on 31 March 2017 and may vary slightly from the version subsequently printed in The Socialist.