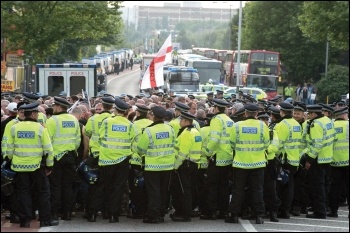 It was difficult to tell, peering through the massive police protection they require in order to show their faces in public. But it looked like a motley crew of not much more than 100 mustered for the 1 April Britain First/EDL march in central London.

Their humiliating tiny size - after boasting that thousands were coming - shows how little toehold these nasty racist thugs have in the population. The main threat of racism and division comes from the mainstream political parties and the right-wing press.

Socialist Party members participated in the much bigger counter-demonstration. But the policing was a disgrace. How much money was spent to herd and shove anti-fascists around central London streets, constantly threatening arrest, occasionally piling in to snatch a protester?

This outrageous policing is clearly designed to intimidate protesters - and sadly it did mean that some refugees who attended felt too unsafe to continue to participate. Counter-demonstrators were sep-arated off from the public and made to look like we were the problem, when actually our anti-racism is shared by the majority in society.

How can this be overcome?

Far-right groups have been in disarray recently, and have been pushed back by community mobilisations against them. But deepening austerity and anti-immigrant rhetoric from the main political parties and press could allow groupings on the right to grow.

So it is important that the far right is countered whenever is raises its head, sometimes at short notice. The Socialist Party argues that the most important force to mobilise is the working class, and in particular the organised working class in the trade unions.

A massive, united campaign of working class people has the power not only to counter protests by groupings like Britain First and the EDL, but to hold out hope in a real future to those small layers of people who might be attracted to them.

This is why it is so important to build a mass fight to defend the NHS, defeat schools cuts, fight for homes for all and end cuts and privatisation - and to fight for a clear socialist alternative to austerity and racism.

The trade unions should be at the heart of any fight against the far right, making it clear that they stand firmly for defending all sections of our communities against austerity attacks and racism. Imagine the effect if transport workers shut down stations, and if bus drivers, bin workers and fire fighters blocked streets!

This is particularly the case when local communities need to defend themselves from invasion by unwelcome far-right rallies, but also applies in central London. Trade unions could also supply stewards.

Such mobilisations and organisation would give confidence to many more people, including school students and refugees, to participate, and would really put the far right in its place!