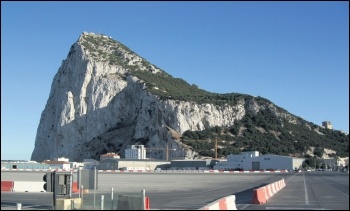 Tensions over Gibraltar show there is no cohesive approach to Brexit within the British or European ruling classes, photo by Richard Leonard (Creative Commons)   (Click to enlarge)

Talk of Britain 'going to war' with Spain, European politicians telling each other not to 'lose their cool' - it could all seem rather surreal. But the Gibraltar tensions that have developed in the latest stage of the Brexit process show the truth of what the Socialist Party has argued. The chaos shows that there is no cohesive approach to Brexit within the British or European ruling classes - there is only division and instability within a context where the rights and interests of working class people (in Britain, Gibraltar or anywhere else) are of no concern to the ruling elites. This division should be an opportunity for the workers' movement - but as yet has not been seized.

The EU's draft negotiating guidelines poured cold water on any idea that May and the British government would have their way. There will, the council of the EU says, be no parallel talks on a future trade deal until 'significant progress' has been made on the details of Britain's 'exit payments' and other issues. May had suggested that Britain would keep access to the single market in industries where it would be most beneficial - the EU says there will be no sector-by-sector agreements.

It is possible that some splits on these issues could emerge as the different capitalist classes of Europe promote their own national interests, but for now they are presenting a united face. A big factor in this initial stance is the precarious footing of the whole EU and the risk of the idea of leaving becoming even more popular among the working class of other member states. The Greek debt crisis is coming to a head again, with payments of €7 billion due in July. Far-right (and anti-EU) French presidential candidate Marine Le Pen is neck-and-neck with millionaire 'independent' Emmanuel Macron going into the first round elections in two weeks' time.

'Rise of the right'

Some on the left continue to lament a 'rise of the right' in Britain and elsewhere. This is wrong - and is becoming more and more clearly so. We must of course remain vigilant, and some racists have been given confidence by the reactionary rhetoric from both sides during and since the referendum. But as a whole, the right is in crisis.

Just look at the current state of Ukip. Arron Banks, the party's main funder, resigned his membership and is setting out to build a new 'movement' targeting unseating Remain MPs. Then just 12 days later the party's only MP, Douglas Carswell, followed suit. This, just two years on from their hopes of winning up to 30 seats in the general election.

Meanwhile, the Tories, although having presented a relatively united veneer in recent weeks, constantly teeter on the edge of civil war. Their sheen of stability cannot last, especially given the EU's guidelines undermining every promise May had made to unite them. A glimpse of this was seen when six of the ten Tory MPs who sit on the Brexit committee walked out of a meeting and refused to back the committee's own report on the impact of Brexit happening without a trade deal in place. As we have previously outlined, it was always utopian to pretend, as May did, that both wings of the Tory party could be satisfied by the terms and outcome of Brexit negotiations.

The only reason that the right feels any confidence is because of a lack of organised opposition from the trade union and Labour leaders. Jeremy Corbyn has been almost silent in his response to the triggering of Article 50. With some similarities to May's predicament, Corbyn is under pressure from all sides within the Labour Party. But his response should be to come out with a clear, fighting programme, not to go quiet.

Highlighting the vacuum left by Corbyn's evasion of the key issues, ex-Labour leader Ed Miliband wrote an article in the Observer jointly with Blairite-in-chief Hilary Benn. They set out their case: "The right approach is to accept the result, fight hard Brexit and, crucially, set out a progressive settlement for Brexit Britain... All of us who care about a progressive future for Britain must not let the future be decided between the right and extreme right."

They talk about investing in infrastructure, breaking with casualised exploitative labour practices, funding the NHS, making Britain an 'internationalist' country, helping refugees and tackling climate change. But these politicians fully accept the logic of austerity that means exploitation of workers and cuts to our NHS. They do not challenge, for example, the 'red line' in the EU negotiation guidelines to preserve the EU state aid and competition rules prohibiting nationalisation. The Labour right cannot be allowed to present themselves as the voice of 'progressive' Brexit.

Instead the workers' movement and socialists, with Corbyn in the lead if he shows himself willing, must be clear on a programme for the 99% throughout negotiations and after Brexit. Our movement stands against all austerity. It stands for the scrapping of all anti-union laws and for full rights for workers to organise. It stands in defence of migrants and refugees and against all racism. These things by their very nature mean standing against the neoliberal EU.

The discussions taking place about what kind of Brexit we need - not just in Westminster but around dinner tables and in workplaces in working class communities - can be an opportunity. The left needs to fight to put centre stage that hand-in-hand with 'what kind of Brexit' comes 'what kind of society'. We need to bring into the mainstream a conversation about an internationalist, socialist Brexit - as a step towards a voluntary, democratic, socialist federation of European states - and to convince the majority of working class people that fighting for that is the only way we can secure jobs, decent wages, homes and services for all.