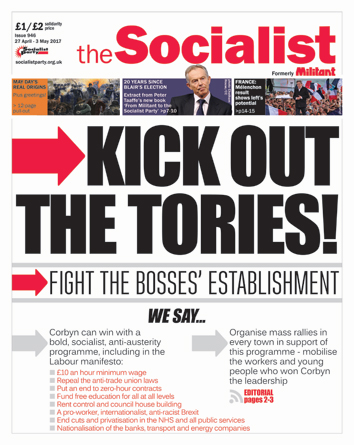 Watching the brilliant 'Guerrilla' TV drama with Idris Elba, about the British Black Panther Party in the early 1970s, where black and Asian people faced a very harsh reality with constant police brutality.

The left-wing militant characters know that it is the British establishment, at root, that is racist, corrupt and capable of anything to keep a right-wing power base firmly in place. The activists, who without doubt have the humanity if not the sham of a law on their side, must fight fire with fire.

Working class white people have not usually suffered the same potent force of a ruthless establishment against them - at least in terms of false imprisonment or beatings based on colour alone.

But the oppression of the whole working class is very harmful to the health and wellbeing of all individuals, families, children, the disabled, the elderly and the sick through vicious Tory policies and cuts more reminiscent of the 1930s than the 1970s.

This is why this election is so vitally important, to unite everyone behind socialist demands, get behind Corbyn and vote the Tories out. It's life and death for many.

I'm curious about the cause of the blood-letting between Liverpool Labour councillors and metro-mayor candidate Steve Rotheram.

They both embrace the insane strategy of carrying through Tory cuts as the best way of 'defending' the city (Liverpool Echo, 13 April). Why then are Labour councillors refusing to distribute election literature for Labour's metro-mayor candidate?

It appears that Rotheram's reference to the damage wreaked on Liverpool by Thatcher has triggered unease among Labour councillors - on the grounds it will remind people of the campaign to defend the city spearheaded by the socialist council in the 1980s.

Councillor Steve Munby is quoted as bleating that he "can't think of anything more damaging than to put out a leaflet evoking the 80s which will remind people of Militant."

His anxiety is justified. The more the younger generation learns about the magnificent campaign of resistance to Thatcher - spearheaded by the 47 Liverpool Labour councillors, in which Militant played a leading role - the more they will question the role of Labour councillors and MPs who meekly accept Tory cuts without any semblance of a fightback.

This follows on from an incident in the local Garston and Halewood Constituency Labour Party. A resolution supporting the RMT's campaign against driver-only operated trains was ruled out of order - on the grounds that it would embarrass Rotheram.

This is another reason for supporting the Trade Unionist and Socialist Coalition's mayoral candidate Roger Bannister, the only anti-austerity, pro-RMT metro-mayor candidate.

It seems that most establishment writers find it impossible to comment on conflicts in the Labour Party without an inaccurate reference to the Militant Tendency.

Sean O'Grady's piece - "I'm far from pro-Corbyn, but the Momentum conference made me wish the Blairites wouldn't ignore them" (Independent, 26 March) - was another in this vein.

Perhaps he is ignorant of the fact that three Militant supporters were elected as Labour MPs in the 1980s, with firefighter Terry Fields winning what was supposed to be a Tory marginal.

Or that Militant supporters led the All-Britain Anti-Poll Tax Federation, which led a mass movement that defeated that inequitable tax and brought down Thatcher.

Sounds somewhat removed from the picture of a group that didn't "want to win elections and campaign on the streets."

Labour Party members would do well to examine the real lessons of what Militant argued for in the Labour Party, rather than the caricature that O'Grady and others have presented.

Militant - and its successor, the Socialist Party - stands for accountability of MPs, defence of public services, support for trade union struggle. Many of those inspired to join Labour in the wake of Jeremy Corbyn's election will find that they share more than they think in common with Militant.

As a teacher of history I am confronted consistently with the challenges of teaching about the Holocaust.

I have recently been in Leeds for a pre-Auschwitz visit seminar, and am due to attend a day trip to Auschwitz with some school students. At the orientation seminar I heard survivor testimony from a truly inspirational man, Steven Frank.

Steven was brought up in a secular Jewish family in the Netherlands, with an English mother and a Dutch father. His story is one of millions, but his warmth, humour and genuine belief in the goodness of all humanity was inspirational. His message was of love, and the strength of the human spirit.

Steven experienced as a child the unrelenting nature of Nazi atrocities. But he also experienced the willingness to fight: his father was a prominent member of the Dutch resistance, and he talked passionately about the need today to fight against the rise of right-wing populism in the US and Europe.

The Nazis ran arguably the most evil and barbaric regime in history. But we must not forget this was not a random event, nor was it unavoidable.

Capitalists in Germany collaborated with and funded the Nazis through fear of the rise of workers' organisations, and the first victims of Nazi atrocities were the leaders of the workers' movement. The workers' movement, in turn, could have defeated Nazism with a bold programme to seize power with the working class.

In times of crisis, the capitalist class can eventually turn to fascistic methods to hold onto power and to crush the labour movement.

As socialists we must be armed with the correct ideas to fight racism, to fight for the labour movement and to fight for a socialist world. Only then will we be able to truly utter the phrase "this will never happen again."

AFC Militant, the recently created football team for Socialist Party members, beat neighbouring Virtual Goldfish in a 5-2 thriller on 9 April. Playing only our second match, we recovered from a previous narrow loss.

Militant started brightly with a front three getting behind the opposition defence. Virtual Goldfish fought back effectively, repeatedly playing the ball over our defensive line. Half time: Militant 3 - Virtual Goldfish 2.

Militant started the second half well, finding plenty of room behind the opposition defence. Ian Pattison finished the game with a darting run and great strike to secure his hat-trick.

The Socialist Party supports the working class traditions of football - from the workers who set the clubs up, to protests against the financialisation of the game, and football in the workers' movement itself.

If you would like to play, attend games or help support the team, contact Paul Callanan on [email protected]