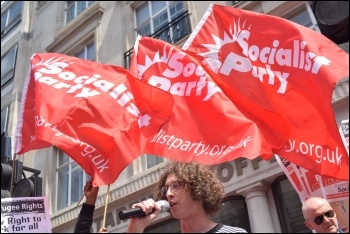 All who attended the Tories Out demonstration on 1st July will have been given a huge boost of confidence that the anger and determination exists to bring down the weak and wobbly Tory government. Many tens of thousands of workers and young people came to express their opposition to the Tories, the DUP and austerity.

At various points of the day hundreds of young people joined the vibrant 'red bloc' organised by Young Socialists - Generation Socialist. The open-mic stage which launched the bloc at the start of the demo had queues of people wanting to share why they had come along. 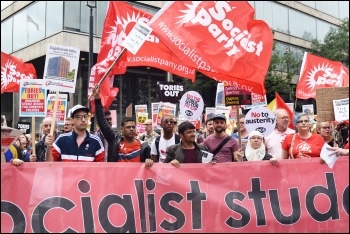 The now famous 'oh Jeremy Corbyn' chant echoed around the march throughout. But this was no blind hero-worship - people were serious about winning what Corbyn promised in his election manifesto. Socialist Party placards calling for people to 'organise, strike, resist for Corbyn's programme' flew out of our hands at tube stations and coach stops as people arrived. So too with our 'capitalism kills' placards with an evocative picture of the burnt-out Grenfell Tower.

A speaking stage on the final stretch of the demo, organised by the National Shop Stewards Network, received a great response as crowds arrived. When Socialist Party member and Barts Health Trust Unite branch secretary Len Hockey said "we're going on strike", there was a roar of support from those passing.

While it was a welcome and lively demo, the turnout for it was only a fraction of what could have been achieved had the trade unions turned fully to the task of building for it and organising coaches. Instead there were reports of transport being called off even on the morning of the day itself.

It was even more impressive, therefore, that a large number of people made their own way on trains from around the country and in droves from across London. As discussed in the Socialist's editorial below, this must be just the beginning.

Editorial of the Socialist, issue 955

After the demonstration - what next?

"For years we have campaigned for the idea: another world is possible", said John McDonnell, Labour's shadow chancellor, at the 1 July People's Assembly (PA) demonstration closing rally in Parliament Square. "But now", he concluded to rapturous applause, "we can truly say another world is in sight".

A mood of celebration dominated the day and was reflected from the platform. Almost every speaker said, in different ways, that the Tories were 'weak and wobbly' and that there was a real prospect now of a Corbyn-led government.

Unfortunately, however, there was less clarity from the platform speakers on the next steps that are needed to actively work to bring down the government, or to build the forces that will be needed to meet the inevitable opposition of the capitalist establishment to a Corbyn government.

"Every worker needs a pay rise", she said - and who could disagree? But she then said absolutely nothing on what the TUC proposes to do, not even to use the new political situation for a mass unionisation drive.

That is not good enough. The TUC, the coordinating body for over six million workers, is a counter-power to the government. If it gave a lead, Theresa May would be gone in months. It was a political mistake by the PA organisers not to use the demonstration to make a firm call on the TUC to act. 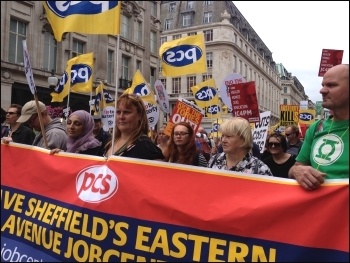 The same was true with regard to Labour councils, also a potential counter-power to the government.

A Fair Funding for Schools campaigner spoke passionately about the present £3 billion schools funding gap and teacher redundancies. But PA stalwart and National Union of Teachers executive committee member Alex Kenny offered no way forward in response. "We don't know when the next election is", he said, "but we do know there's a budget in November. So if you live in an area with Labour, Liberal Democrat or Green MPs or councillors, you must work with them to build the pressure on the Tories before then".

But why do councils, Labour ones especially, need 'permission' from the May government 'in November' to act on the schools funding crisis now? They have the power to step in and, using their borrowing powers and reserves, underwrite school budgets so that the sacking of teachers and support staff could be stopped immediately.

What could the government do? If it dared to take on councils protecting local public services it would only bring the next general election nearer and guarantee its final demise. Austerity must be resisted in action, not just in words. 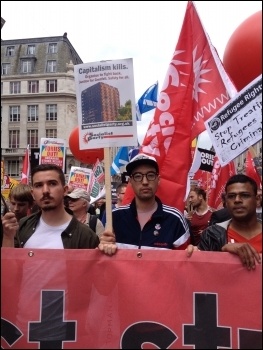 One speaker, the Green Party London Assembly member Sian Berry, did point to the record of Labour councils on housing. Grenfell Tower was referred to by many as a symbol of Tory Britain but, as Sian Berry said, most Labour councillors are pursuing exactly the same policies of privatisation, deregulation and cost-cutting. Significantly, her criticisms were not received with any hostility by the crowd.

But even her points were only half made, not spelling out clearly the need to clear the Blairite councillors out of the Labour Party if it is to be transformed into a real anti-austerity movement, or offering support to Jeremy Corbyn in that task. And when Green councillors have been in positions of power, they too have not resisted the austerity agenda.

Overall, the demonstration confirmed the changed mood and raised expectations since Jeremy Corbyn's general election campaign. But it was a missed opportunity by the PA organisers not to map out a clear way forward, reflecting their political adaptation to the right-wing of the labour movement.

There were calls, rightly, for more demonstrations. Lindsey German, convenor of the Stop the War Coalition, said: "We can't wait for a general election. If this is the number of people we can get on the streets in just three weeks, imagine what we can get to demonstrate outside the Tory Party conference in October".

But on the vital task to re-shape the labour movement for the battles ahead, to organise to defeat the Blairite remnants as well as the Tories, not a word was said to the assembled crowds.

Jeremy Corbyn concluded the rally by stating: "It's the ideals of social justice, of unity, of people coming together to oppose racism and all those that would divide us, that are the ones that are moving forward." Although, he did not explicitly say that it is only through socialist policies that those ideals can be realised - another frustration on a day when tens of thousands mobilised to seek an answer to the question: What next?

The July edition of Socialism Today, the Socialist Party's monthly magazine, includes a call for Jeremy Corbyn to go over the heads of the Blairites who still dominate the Labour Party apparatus and present his own proposals for a transformed Labour Party directly to members and trade union supporters.

Peter Taaffe, in an article headed 'Britain's earthquake election - consolidating the Corbyn revolution', argues that "the civil war within Labour has not been settled by Jeremy Corbyn's success in the election campaign and subsequent events like the Grenfell Tower fire...

"The majority of the Parliamentary Labour Party is still steeped in the ideas of Blair, of Labour remaining within the framework of capitalism, and ultimately being prepared to bow to the pressures of the system...

"If Corbyn does not act, his triumph could dissipate over time... [He] should boldly act as he did with the general election manifesto. He appealed over the heads of the right and got support for his radical proposals. That confronted the right with a fait accompli!

"He should do the same by presenting his own democratic constitution to a referendum of all Labour Party members - full and associate - which would have at its heart mandatory reselection of MPs and the replacement of the bureaucratic machine, with power resting in the hands of the membership, particularly new members and the trade unions.

"It should also enshrine the principle of a federal arrangement which would lead to the re-admittance of all expelled socialists and organisations back into the Labour Party...

"Such an approach would shatter the plans of the right to pursue a rear-guard struggle to frustrate and delay the real involvement of workers and youth in a revived, socialist Labour Party."

The magazine also carries a major article on the lessons of the Syriza government in Greece, two years on from the July 2015 referendum which saw a massive victory for the anti-austerity struggle but which was then turned into a defeat. 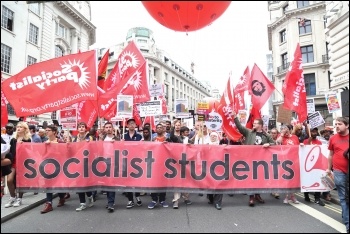