Blairite EU rebellion: No to the bosses' Single Market

Kick out the saboteurs 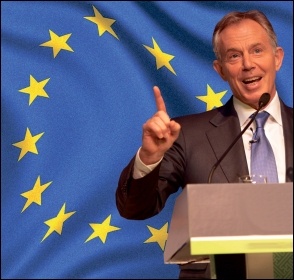 Jeremy Corbyn has had to sack three members of his shadow cabinet. They were among 50 Labour rebels who voted to remain in the European Single Market, against the party's instruction to abstain.

Labour's right wing may have been temporarily silenced by Corbyn's successful election campaign. But this shows they have not gone away and are still organising to undermine his pro-worker leadership.

Corbyn was right to face down this rebellion. But he must now go further in both taking on the Blairites and developing an alternative, socialist Brexit plan.

The majority of working class and young people were rightly appalled by the anti-immigrant bile that came from the official Leave referendum campaigns. For this reason, some understandably support efforts to 'soften' Brexit.

However, the establishment's 'soft Brexit' has nothing to do with a principled defence of migrants.

Umunna himself said in September last year: "If continuation of the free movement we have is the price... then clearly we couldn't remain in the Single Market." More recently he's stated that immigration could still be attacked while remaining a member.

Many of the rebel MPs are supporters of 'Progress', the main Blairite organisation within Labour. They support the Single Market because it is a bosses' charter.

It is a free-trade area with rules meant to assist capitalists by - among other things - undermining workers' collective organisation, encouraging privatisation, and blocking nationalisation.

The Labour right is struggling to regroup. They see the EU as an issue on which they can make gains. They're even willing to work with sections of the Tory party to do so.

The Telegraph has reported discussions between the two, and not for the first time. The Mail on Sunday even quoted a source who rightly said that Umunna "has got much more in common with open-minded Tory MPs than he does with Corbyn."

Jeremy Corbyn seems to be moving back towards his historical pro-worker position of opposing the EU as a bosses' club that pushes austerity and privatisation.

A socialist, internationalist vision of Brexit would guarantee the rights of migrants. It would also stand up to the economic sabotage threatened by big businesses.

Warnings of job losses and falling tax revenues come from capitalists defending fat profits. Companies which threaten to pull investment should be taken into public ownership under democratic workers' control and management.

While the rebellion was a damp squib, it shows the Blairites cannot be trusted. They still want to oust Corbyn and end the left's challenge for control of Labour. To prevent this, Corbyn must lead a campaign to democratise the party.

Policies should be decided by members and affiliates at a democratic conference, with a collective voice for trade unions. All elected representatives should face mandatory reselection to make sure they represent the party and not their own interests.

Genuine socialists and socialist groups should not remain excluded from Labour while Blairites are allowed to stay and use their positions to undermine Corbyn's anti-austerity leadership.