Fight for safe homes for all 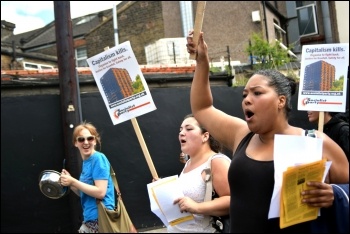 Hundreds of tower block residents have been decanted by Southwark Council in south London over serious safety concerns the Labour administration initially dismissed.

As reported in the Socialist last month, a meeting took place organised by the Southwark Group of Tenants' Organisations on 17 July on behalf of residents on the Ledbury estate. We questioned the head of regeneration in Southwark, Councillor Mark Williams, about the massive cracks that had been in the blocks for over 20 years.

He indicated at the meeting that there was nothing wrong. Later on when I confronted him, he implied the concern over the issue was all down to a bunch of troublemakers.

Now the council has been forced to evacuate hundreds of residents from four blocks after a report by Arnold Tarling, a structural engineer who had also foreseen the dangers of cladding like that used on Grenfell Tower.

Tarling said the gas installations in the block represent a massive safety hazard. The Guardian reports him saying of the council "you have to question their competence." This goes back to the infamous Ronan Point disaster in east London in 1968.

A block built the same way as Ledbury - bolting concrete panels together - partially collapsed after a gas explosion, killing four. The investigation after Ronan Point said blocks built this way must either be reinforced or not have gas.

If it is not possible to make the blocks safe, the council must provide quality, permanent homes in the borough without delay.

If it is possible, the council must start full repair and upgrade work - with no profiteers' corner-cutting - without delay. Residents must be given proper temporary accommodation, or a suitable permanent alternative if they prefer.

Southwark has reserves of over £187 million which it can use for this work now. And its eventual income from 'S106' payments - from private developers in lieu of their legal obligation to build 'affordable' homes - is due to total around £300 million.

There can be no excuses about austerity. Start today and send the bill to Westminster.