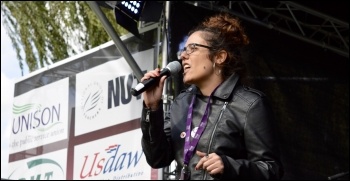 An event aimed at challenging oppression through collective action was held on 19 August. Organised by Hull and District trade union council, the first 'collective youth festival' was primarily aimed at developing the next generation of trade unionists to continue the fight against the bosses. It attracted between 1,500 and 2,000 people.

The event was sponsored by individual trade union branches in Hull. Local bands and artists played the event for free, giving up their time and equipment.

Speakers from numerous unions detailed the importance of unions and of young people taking up the mantle to protect our public services and fight for a better future. Newly elected Labour MP Emma Hardy read out a message of solidarity from Labour leader Jeremy Corbyn to the festival.

One of the key themes running throughout was that of internationalism. The festival was also privileged to have two international speakers.

Laura Garcia, a member of the Spanish students' union, detailed its role in fighting back against the Spanish government's plan to attack education and young people in Spain. To huge support from the crowds, Laura finished her barnstorming speech calling for youth to organise against this dreadful system.

Danny Byrne spoke about the attacks on democratic rights in Ireland and the importance of international support for the Jobstown Not Guilty campaign to defend the right to protest. Special thanks were given to Hull trade union council and Hull Unite for their donations to the solidarity campaign.

Socialist Party members played a key role in the organisation of the festival, with members from Sheffield and Leeds coming along to help out. Our material was well received, with interest in the newly set up Hull Young Socialists.