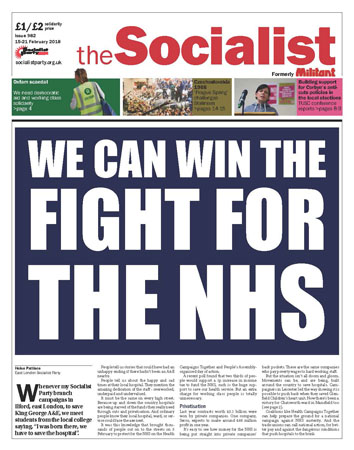 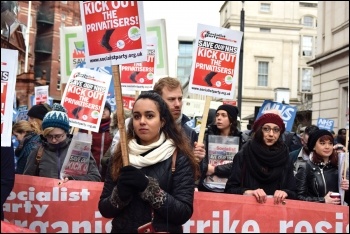 Whenever my Socialist Party branch campaigns in Ilford, east London, to save King George A&E, we meet students from the local college saying, "I was born there, we have to save the hospital."

People tell us stories that could have had an unhappy ending if there hadn't been an A&E nearby.

People tell us about the happy and sad times at their local hospital. They mention the amazing dedication of the staff - overworked, underpaid and undervalued.

It must be the same on every high street. Because up and down the country hospitals are being starved of the funds they really need through cuts and privatisation. And ordinary people know their local hospital, ward, or service could face the axe next.

It was this knowledge that brought thousands of people out on to the streets on 3 February to protest for the NHS on the Health Campaigns Together and People's Assembly-organised day of action.

A recent poll found that two thirds of people would support a 1p increase in income tax to fund the NHS, such is the huge support to save our health service. But an extra charge for working class people is totally unnecessary.

Last year contracts worth £3.1 billion were won by private companies. One company, Serco, expects to make around £65 million profit in one year.

It's easy to see how money for the NHS is being put straight into private companies' back pockets. These are the same companies who pay poverty wages to hard working staff.

But the situation isn't all doom and gloom. Movements can be, and are being, built around the country to save hospitals. Campaigners in Leicester led the way showing it is possible to push back when they saved Glenfield Children's heart unit. Now there's been a victory for Chatsworth ward in Mansfield too.

Coalitions like Health Campaigns Together can help prepare the ground for a national campaign against NHS austerity. And the trade unions can call national action, for better pay and against the dangerous conditions that push hospitals to the brink.