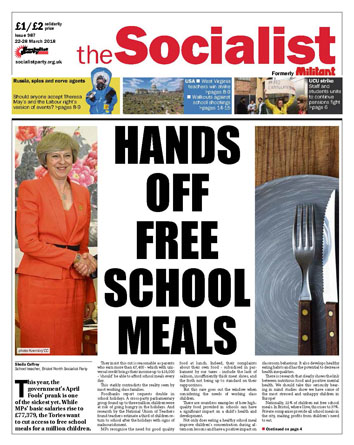 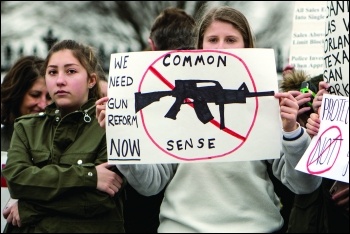 On 14 March, nearly a million students in the USA walked out of their schools to demand an end to gun violence. Some of these protests are reported below.

These walkouts come after last February's horrific massacre at Marjory Stoneman Douglas High School in Parkland, Florida, in which 17 students were murdered and many more injured.

After a seemingly endless catalogue of school massacres by gunmen there is now a growing student movement demanding action to stop the violence through gun control. The movement has also denounced the powerful National Rifle Association (NRA), which backed Trump's presidential campaign, and the largely Republican politicians who do the bidding for the highly profitable gun lobby.

In an article on 21 February (Parkland School massacre: Youth rise up against violence and the NRA) Stephen Edwards of Socialist Alternative (US co-thinkers of the Socialist Party) wrote: "The enormous number of military-style weapons that are available in the US present a clear and present danger to working class people and youth. A majority agree that we need reasonable limits on the type of firearms available, and also restrictions on the ability of people with a history of violence and threats of violence to have access to them." ...

"There are many reasons for the scale of violence but all point back to the savage history of American capitalism and the brutal alienation and inequality it engenders today." ... "We reject the idea that only the state can be trusted with weapons. The history of police and military interventions is one of attacks on unions and civil rights organisations... And as we have seen in too many instances, the ability of the police to shoot unarmed suspects, particularly people of colour, without consequence."

Thousands of students from high schools across San Francisco protested against the NRA, the gun manufacturers, and the broader systemic violence of racism and exploitation that they've grown up in. At 10.30am, students began crowding the steps of City Hall, despite a heavy mid-morning rain.

Every ten minutes for an hour, a new contingent of students would arrive, swelling their numbers to roughly a thousand, and forcing the closure of the street.

While a few politicians came out to voice their support for the demonstrators, the one hour rally had a majority of student speakers.

Almost everyone highlighted the criminal role the NRA has played in profiting off the deaths of students. Several student speakers linked their call for gun control, with the need to end racism and sexism, and situated gun violence within the broader systemic violence caused by capitalism.

After the rally ended, students began their march to San Francisco's Ghirardelli Square - one of the more popular tourist destinations in the city.

Storming down Market Street, students took turns leading chants of "Hey, hey, NRA, how many kids did you kill today?", along with "What do we want? Gun control. When do we want it? Now!", and "No more silence! End gun violence!"

Student leaders made clear that this was just the beginning, and pointed to the March for Our Lives on 24 March as a next step towards building a youth-led movement for gun control. One speaker received strong applause when he spoke to the need to keep their movement independent from the politicians.

Well over 1,000 students walked out of Lane Tech in a student-organised, albeit administration-sanctioned, event.

The response to our flyer and our slogans 'end gun violence', 'sustain the student movement', and 'fight back against capitalism' was met with enthusiastic support.

The Columbus City schools board declared 14 March to be a district-wide "safer together day" in support of the walkouts, but it was student leaders in high schools across the district who took action in planning the walkouts and rallied their classmates together to speak out against gun violence and the NRA.

Organisers with the local Youth Empower group, a youth organisation of the Women's March, played an important role in helping coordinate, promote, and support the student organising efforts.

At South High School, a predominantly black high school on the south side of Columbus, approximately 200 students walked out of classes in freezing temperatures and gathered on the track field for 17 minutes in honour of the Parkland shooting victims.

Student organisers voiced the need for continued action, in the form of walkouts and rallies, to push legislators to pass meaningful gun reform to address the epidemic of mass school shootings. There was an understanding that youth will need to keep building pressure and organising walkouts, protests, and occupations to force politicians to acquiesce to demands for gun control.

While there was overwhelming support for a ban on assault weapons, students correctly recognised the persistent action that will be needed to effectively challenge the corporate status quo politicians who accept thousands in donations from the NRA.

Many students also called for broader demands to address school and community safety. About 300 students descended on the state capital building to speak with representatives and to hold a rally on the steps of the Statehouse.

During the rally, students included calls to demilitarise schools and fund social workers and counsellors. The rally ended with chants of "Counsellors not cuffs!"

Organisations including Socialist Alternative have been working alongside students from across the region to mobilise the largest possible turnout on 24 March.

Students held signs with slogans like "#Enough", "Arm me with books not bullets", "Not today NRA" and "Fear has no place in our schools #NeverAgain".

Despite the nationwide call only being for a 17-minute walkout, students from across the city stayed out and converged on the University of Washington for a more sustained protest and march.

Many high school students Socialist Alternative spoke to identified as socialists. Some even were conscious of capitalism as a root cause of alienation and gun violence, as well as seeing the need for fundamental system change.