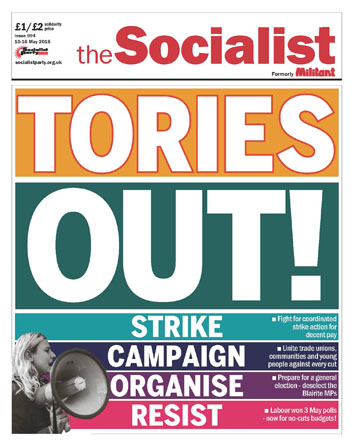 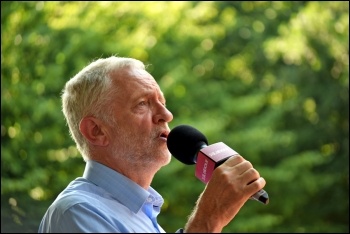 The following is a statement on the issues of antisemitism and Jeremy Corbyn by Socialist Struggle Movement, the Socialist Party's sister organization in Israel-Palestine.

"Modern antisemitism may not always be about overt violence and persecution, though there is too much of that even to this day. We must also be vigilant against subtler and invidious manifestations of this nasty ancient hatred". That sharp warning against the danger of antisemitism was voiced by Jeremy Corbyn in a speech made two years ago.

Against the background of a worrying re-rise of various forms of racism, including antisemitism, across crisis-ridden Europe and Britain, whipped-up by right-wing elements, the genuine principled approach displayed by Corbyn is particularly important.

From the moment he was first elected to his party leadership in 2015, the incredible smear campaign against Corbyn has grown to an international scale, as capitalist elites have been fearful of the potential behind the mass support for him - the thirst for change and the growing support for left, anti-capitalist and socialist ideas.

The Israeli capitalist establishment was quick to join the choir. Corbyn has been falsely accused again and again by Israeli capitalist media and politicians of supporting terrorism, being a holocaust-denier and allowing or advocating antisemitism.

Thus, the Israeli financial newspaper The Marker remarked in 2015: "Even the slightest chance that a holocaust-denier and a socialist reactionary-person, who suggests a nationalisation of railways as a solution to the British economy's maladies, would become the prime minister of one of the western powers - is horrifying".

This is the typical class hostility of capitalists anywhere towards any hint of a socialist alternative to their rule.

It is a traditional and frequently-used spin by the Israeli right-wing establishment, and particularly the Netanyahu regime, to demagogically label left-wing critics of Israeli government nationalist policies as 'antisemitic', even against Jewish or Israeli critics - who are sometimes labelled "self-hating Jews".

Israeli former combatant soldiers who dare to raise their voice against the Israeli occupation have been accused of serving foreign antisemites.

The slur against Corbyn follows the same pattern, as his right-wing pro-capitalist rivals demagogically conflate criticism of Israeli government policies and of Zionism with antisemitism.

Such demagoguery is used as a camouflage for weak political arguments advocating destructive policies.

However, the Israeli government's abhorrent attacks on the Palestinians, including the slaughter of dozens of Palestinian protesters in recent weeks alone, have raised and will continue to raise opposition worldwide, including from among Jewish people and organisations.

The Jewish-origin US senator Bernie Sanders has been one such critic of the Israeli government crimes in recent weeks.

In Britain, the group Jewish Voice for Labour, which justly insists on advancing opposition to the oppression of the Palestinians, shows how the right-wing pro-capitalist Jewish organisations who incite against Corbyn should not be taken seriously when they attempt to give more weight to their claims by implicitly pretending to speak in the name of Jewish people in general.

Just as the Israeli right-wing slur against Corbyn is motivated by an agenda defending capitalism and national oppression, it is no surprise that also in Britain those trying to lay siege to Corbyn are generally those with a record of disregarding islamophobia or of defending neoliberal measures and imperialist wars, including the devastating Iraq war, which caused untold suffering throughout our region.

Len McCluskey, general secretary of the trade union Unite in Britain, was completely right to say that Israeli Labor Party chairman Avi Gabbay "is guilty of a cynical and outrageous smear" against Corbyn.

This followed Gabbay announcing on 10 April the suspension of relations between the Israeli Labor Party and the leader of Britain's Labour Party on the basis of allegations that Corbyn had shown "hostility... to the Jewish community" and promoted "antisemitic statements and actions".

In this, Gabbay - an unpopular pro-capitalist multi-millionaire, and a minister in Netanyahu's government up till recently - has been continuing the incitement voiced by his predecessor, Yitzhak Herzog and other leading neoliberal figures of the party, who have never missed an opportunity to try to acquire support by national chauvinistic propaganda.

Gabbay has stated among other things that 'the Arabs should be afraid of us' and that 'there is no reason to evacuate settlements in a peace agreement'.

Contrary to the likes of Gabbay, socialists in Socialist Struggle Movement in Israel view Corbyn as a strong opponent of antisemitism and see the attacks being made on him for what they are: attempts to discredit a left-wing politician who has put forward a manifesto seen by capitalists as too radical in favour of working class interests.

We've followed with concern how in some cases false charges of antisemitism have been used to cleanse dedicated left activists from the ranks of Britain's Labour Party.

Among them was the socialist and former Israeli Moshé Machover, who successfully managed eventually to prove the baselessness of the scandalous accusations.

Antisemitism and any form of racism must be fought against. But at the same time, any cynical attempt to make false accusations of antisemitism to smear political opponents must be emphatically opposed.

Enough with the demagoguery! Criticism of the Israeli government, Zionist nationalism, Israeli capitalists or right-wingers, are in no way equal to racism against Jewish people nor to the negating of any democratic rights to Israelis or Jews.

Gabbay also accused Corbyn of showing "very public hatred" towards Israeli government policies. We salute the struggle of workers and youth in Britain against Theresa May's capitalist government, and we share Corbyn's opposition to the anti-working class policies of the right-wing Israeli government and its brutal oppression of the Palestinians.

We advance solidarity in struggle of all working people and respect for equal rights to all nations. We fight for a socialist solution - for socialist and equal states for both Palestinians and Israelis, with full rights for minorities, as part of the struggle for socialist change in the Middle East.

There's no other genuine path to guarantee security, peace and well-being for both Palestinians and Israeli Jews.

The smear campaign against Corbyn is a dangerous attempt to sabotage the struggle for left and socialist solutions and it must be exposed for what it is.