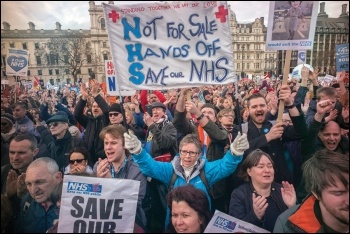 The official NHS England budget deficit is almost £1 billion - with some analysts putting the real figure closer to £4 billion. The ongoing NHS crisis shows no sign of slowing down.

As a nurse, I see every day the struggles facing NHS staff, and the impact that has on patients. The staffing crisis results in skeleton services, nurses moved on a daily basis to cover gaps across hospitals, and unsafe numbers on wards.

'NHS Improvement' reports NHS England is £960 million in the red - or four times that according to the Nuffield Trust thinktank. And we are officially short around 35,000 nurses and 10,000 doctors.

These deficits and the crisis in the health service are no accident. Our NHS celebrates its 70th birthday this year, but it's an anniversary the Tories, Blairites and capitalist class never wanted to reach.

It was only the struggle of working people, the trade unionists and socialists of yesteryear, that forced capitalism to grant the concession of a National Health Service. Since its conception, profit-hungry big businesses and politicians have chipped away at the jewel in the crown of Britain's working class.

Underfunding and cuts by successive Tory and Labour governments - coupled with the disaster of privatisation schemes like 'PFI' and the EU-backed 'internal market' - have left the NHS in a financial hole.

PFI schemes in particular have crippled the NHS. It sums up the insanity of capitalism that on the one hand you have brand new hospital wards - but on the other, because of austerity and these rip-off PFI contracts, trusts can't afford to staff and use them.

But all is not lost. NHS workers are prepared to fight for our futures and our patients. The historic junior doctors' strike in 2016 showed us a glimpse of the potential the NHS workforce has if the unions choose to lead a fight.

The number of local NHS disputes and strikes popping up is increasing. Alongside this are the fantastic victories by grassroots campaigns against NHS closures - including at Glenfield, Chatsworth and Huddersfield, where the Socialist Party played a leading role.

What we need is national action from our trade union leaders. Building for serious, coordinated industrial action could do more than stop the cuts - it could easily end the Tory government.

The Tories, Blairites and capitalist class want to see the NHS broken up and sold to privateers like Virgin Care to run our services for profits, not patients.

Jeremy Corbyn should use the 70th anniversary demonstration on 30 June to renew and extend his calls to nationalise privately run services and invest in our NHS. But he should also make it a launchpad for action: build for mass demonstrations in support of coordinated strike action to get the Tories out!