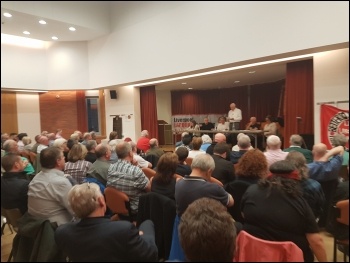 Every seat was taken at the Liverpool 47 meeting on 25 May, photo Dave Walsh   (Click to enlarge)

Three decades since the House of Lords surcharged the Liverpool 47 councillors, the Liverpool 47 group organised this event on 25 May in Liverpool city centre to remember the heroic anti-cuts struggle and events leading to them being removed from office and surcharged by Thatcher's agents the district auditor and the law lords.

The event was supported by the regional committee of Unite the Union and Unite branches donated generously to the event from across the region.

Over 100 attended with every seat taken. Chairman Paul Astbury, a surcharged 47 councillor, gave apologies from Unite general secretary Len McCluskey and raised a laugh when he said an industrial dispute had developed in Kiev which required Len's attention!

The first speaker was Felicity Dowling, a surcharged 47 councillor and deputy-chair of education in 1983-87. She paid tribute to Tony Byrne, who died a few weeks ago. He was responsible for housing in the collective team of the 47, and to the families of the councillors who were subject to the same threats of losing their homes and being made bankrupt.

Sheila Coleman from the Hillsborough Justice Campaign spoke passionately about her own experience as a young mum in Liverpool at the time when the working class was under attack from Thatcher. She said the stand taken by the 47 was an inspiration to Liverpool's working class, shown by the huge rallies of up to 50,000 people.

The campaign had tapped into the fighting spirit of Liverpool people which helped to maintain the campaign and bring its ultimate victory in exposing the cover-up and achieving some justice for the 96 victims.

Peter Taaffe, Socialist Party general secretary and former member of the editorial board of Militant - which was the political backbone of the victorious campaigns that defeated Thatcher. The Militant editorial board was expelled from Labour in 1984, which did not reduce our influence and ideas which found an echo in wide layers of the labour movement and had been embraced by the Liverpool District Party.

The Labour Party today is 'two parties in one' where the right wing continues to try to block the forces of the left by bureaucratic means. Peter called on Jeremy Corbyn to make a stand and drive the Blairites out.

The final speaker was Tony Mulhearn, president of the district Labour Party in 1979-1985 and a surcharged councillor, who said the right wing with its allies in the media were willing to tell any lie to undermine the militant Labour council.

He described the class character of the judges - one was Justice Lawton who had stood as a fascist candidate in London in 1936. Lawton referred to the 47 as 'political zealots' who took too much notice of the people who elected them. The 47 refuted their lies and consistently made the argument for socialist policies; this resulted in increased support at each election.

Tony said the fiction of antisemitism in the Labour Party was being used as a weapon against Jeremy Corbyn. But, he argued, every time Corbyn gives way, the right wing grows in confidence and demands more expulsions of the left.

Tony's analysis resulted in a standing ovation reflecting the support that exists for the stand of the 47, compared to the abject failure of the current crop of Labour councillors to raise a finger of opposition to Tory austerity.

A plaque, initiated by Audrey and Terry White, commemorating the achievements of the 47 and funded by contributions from the labour movement, was unveiled. It will be housed at the Casa, a workers' centre established by the sacked Liverpool dockers.