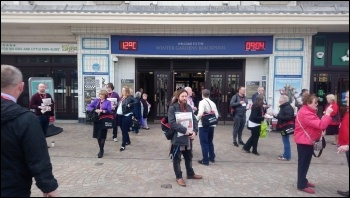 Thinking out loud about how to celebrate the forthcoming 1000th issue of the Socialist, I told the editors I thought the Yorkshire region of the Socialist Party could sell 1,000 copies of that issue. Only problem was, I hadn't told any members in Yorkshire what I thought! So here's how I think we (and other regions) could boost sales.

You are always likely to sell more copies if the paper contains reports from your area or about campaigns you are involved in. So NHS campaigners will want to know the outcome of the judicial review being brought by Hands off HRI to save their Huddersfield hospital.

NHS workers will want to hear about the result of the coordinated ballot by Unison health branches across four West Yorkshire NHS trusts for strike action against 'wholly owned subsidiary companies' (a form of privatisation where an arm's-length organisation is set up, at first owned by the NHS).

The Orgreave Truth and Justice Campaign will have just held their anniversary rally in Sheffield of the police riot in the 1984 miners' strike for which they are still fighting for a public inquiry. And in Hull the trade union council-initiated youth festival is being held on the Saturday of the 1000th issue.

Trade union and community campaign leaders and activists in all these struggles will write about them written from our point of view, not those at the top like in the mainstream media.

I reckon if all our city and big town branches aim to sell 100 and our smaller branches 50, then we could hit 1,000 sales. In Sheffield we sold 15 at the big council offices recently, another 15 at our reinstated Friday evening railway station sale. We could sell 50 on an extended Saturday stall with midweek stalls a bonus on top.

Only three weeks before Trump's visit to Britain, we should definitely visit the main college, and during the local elections we sold eight to 18 on Sunday canvasses so we could do a door-to-door sale on a Sunday or on a long summer evening.

These are just suggestions but if every branch gave it real go for the 1000th issue and then continued with one extra regular sale afterwards, that would be the best way to celebrate the achievement of 1,000 issues of the Socialist.