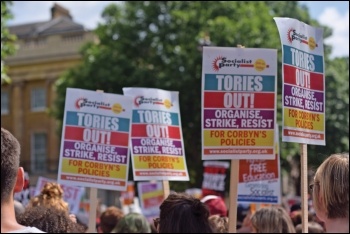 Corbyn needs to call for clear socialist measures and shout them from the rooftop, photo Mary Finch   (Click to enlarge)

The People's Assembly met for its annual conference on 2 June, with a series of workshops and rallies, but with no democratic decisions being made.

John McDonnell, shadow chancellor, spoke at a session explaining Labour's policy of a national investment bank and their plans to take on neoliberalism and "transform capitalism."

In last week's issue of the Socialist an article explained the limitations of Corbyn and McDonnell's programme of nationalisation (see 'Socialist nationalisation: what it is and why we need it' at socialistparty.org.uk).

It will be necessary for a government led by Corbyn and McDonnell to fully and quickly carry out the nationalisations they have pointed out are urgently needed - of rail, energy, post and water. Also to recognise that further nationalisations will be needed to transform society, taking into public ownership the banks and big businesses that dominate our economy, and running them democratically with a socialist plan of production.

Unfortunately, this was absent from the People's Assembly event. When asked what would be the barriers to his programme of investment, redistributing the profits of big business to workers, and scrapping anti trade union laws, McDonnell

said that he had been arranging meetings with bankers and representatives of big business to explain Labour's plans. But why will this make them roll over and allow their profits to be taken away?

When asked what the response would be to a run on the pound, McDonnell said that while they are preparing for every contingency, he "does not believe there will be a run on the pound", and a more likely issue would be the value of the pound going up. Yet the flight of capital that greeted the Syriza government in Greece shows that the capitalists internationally will attempt to punish any anti-austerity government, not least to serve as an example to workers fighting back across the world that they have to accept their lot.

In the face of this planned sabotage a bold approach is necessary, mobilising workers and young people around a fighting socialist programme is the only way to break the hold of the capitalists on society and build a socialist society run democratically instead of by the rule of profit.

Unfortunately, McDonnell said that one the main tasks for them is to "contain people's excitement and commitment when we go into government".

Without measures to take the power away from the bosses an incoming Labour government won't be able to transform the lives of those inspired by Corbyn's anti-austerity message.