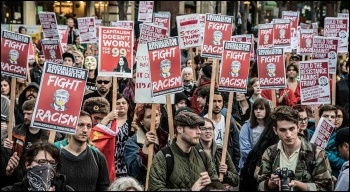 Alongside worldwide overproduction of steel, the ramping-up of US tariffs on steel products to a whopping 25% will negatively impact steel workers' jobs in the UK. Some 31,000 still work in the industry even after the plant closures and redundancies in 2015-16 by billionaire steel magnates. Towns like Port Talbot, the largest steel site in the UK, could be economically flattened.

An even bigger blow could be car exports to the US - the next likely target on Trump's protectionist 'America First' list of tariffs.

Beset with deepening domestic political problems - over his election campaign team's links to Russia; gun-control; supporting far-right racists; sexism and sex scandals; and threatening world war, to name a few things! - Trump is spreading 'fake news' to US workers that his economic protectionism will restore jobs.

However, his trade tariffs have provoked tit-for-tat retaliation from affected countries, which will rebound on US jobs.

The EU has published a ten-page list of products of its counter-tariffs in response - worth €2.8 billion annually.

Trump's protectionism also risks further alienating the White House from its traditional allies in North America and Europe. This rift could open up the field for geopolitical rivals like China and further weaken US capitalism as the predominant world power.

Workers' jobs cannot be safeguarded by protectionist measures advocated by Trump. And neither can they be secured through 'free trade' - advocated by Theresa May and other capitalist representatives - as redundant steel workers in both the US and Britain can testify to.

For socialists it does not matter so much where production is situated in a global economy but which class in society controls production.

The only way for workers to protect jobs and conditions is by conducting militant industrial struggle that forces the bosses to concede better wages and conditions. And they'll always try to claw those back - that's why we need to fight for a socialist world where working class people democratically control production and services.

This is the message that the Young Socialists, along with Socialist Students and Socialist Party members will be delivering through school and college walkouts and protests when Trump lands in the UK on 13 July.