The Anti-Austerity Alliance (AAA), in which the Socialist Party plays a leading role, held a hugely successful election launch meeting in Dublin with over 300 attending.

The meeting was addressed by Socialist Party member and AAA TD (MP) Paul Murphy (facing a judicial witch-hunt by the state over his opposition to the government's unjust water charges), along with Socialist Party TDs Ruth Coppinger and Joe Higgins (who is retiring).

Recently re-elected Seattle socialist councillor Kshama Sawant also addressed the meeting. Kshama is a member of Socialist Alternative, co-thinkers of the Socialist Party in the USA.

Her phenomenal support is due to her willingness to lead unflinching campaigns against big business and in favour of working class people, like the AAA in Ireland.

The general election will be held on 26 February using a system of proportional representation.

The #outsourcingmustfall campaign initiated by the Workers and Socialist Party (CWI in South Africa) in November last year, is winning!

Last month, after ten days of strike action, University of Pretoria management signed an agreement meeting all of the workers' demands. 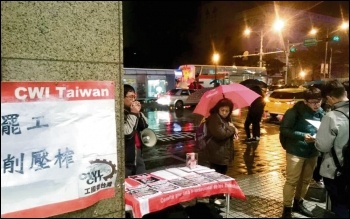 CWI members in Taipai, Taiwan, campaigning for the Nan Shan life insurance workers in a long-running dispute with the company over pension rights and an end to contract labour.