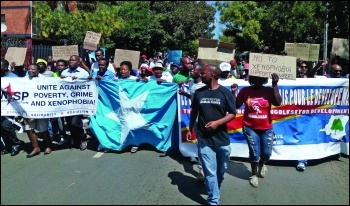 Over recent months a new wave of xenophobic violence has threatened to engulf South Africa. Isolated attacks against foreign residents and foreign businesses took place in the south of Johannesburg and the west of Pretoria.

But the swift action of immigrant groups and organised South African communities, with the Workers and Socialist Party (WASP - CWI in South Africa) playing a leading role, for now at least seems to have prevented the sparks from catching fire.

Even so, for several weeks there was near panic among foreign residents. They feared a repeat of the 2008 violence - which saw 62 murders and the destruction of large numbers of small businesses - or that of 2015, which led to six killings.

The counter-campaign led by WASP, founding the Coalition of Civics Against Xenophobia in Pretoria, culminated in a 400-strong march to Union Buildings (seat of the presidency) on 9 March under the slogan "Unite against poverty, crime and xenophobia".

From the end of January, the Mamelodi Concerned Residents (MCR) group, from the huge township to the east of Pretoria, distributed leaflets across the city blaming "foreigners" for unemployment, crime and drugs and calling on residents to march against "illegal immigrants".

This followed xenophobic statements by the new mayor of Johannesburg, Herman Mashaba. In December, using Donald Trump-like rhetoric, he put the blame for crime in the city on "illegal" foreigners, demanded they leave, and called on the national government to restrict immigration.

Mashaba is a member of the Democratic Alliance (DA), a white middle class-dominated neoliberal party, but one that presents itself with a socially liberal face. Mashaba made these comments with zero consequences within his party. Indeed, former DA leader Helen Zille recently caused outrage by tweeting that colonialism was not all bad.

Capitalist politicians find xeno-phobia and other reactionary ideas useful to divert attention away from the failures of their rotten profit system.

Xenophobia is able to have some influence over some sections of the working class, and especially the unorganised poor and unemployed because of the grinding poverty that the crisis of capitalism means for the majority.

The MCR march was granted permission without any questions raised by the DA-controlled Tshwane (Pretoria) municipality. It went ahead on 24 February. The ANC-controlled Department of Home Affairs agreed to meet the leaders of the march.

In this political vacuum WASP was able to take an initiative.

We organised hundreds of worker activists under the #OutsourcingMustFall campaign to distribute leaflets in their townships countering the MCR's lies and calling for organisation and struggle to deal with the very real issues of poverty, crime and unemployment.

At a public meeting we organised on 19 February over 50 attended, representing more than a dozen communities. The meeting agreed to found an anti-xenophobia coalition.

On 22 February, two days before the planned MCR march, the coalition went ahead with a press conference with Mametlwe Sebei and Themba Ncalo (both leading members of WASP), alongside a leader of the Congolese community, acting as spokespeople.

Over the next two days these WASP leaders dominated the media. This played an important role in giving confidence to the vast majority of South Africans who are opposed to xenophobia, and the tide began to turn against MCR and its march.

We put forward a clear call for the organisation of community self-defence patrols to defend foreign residents and businesses in the run-up to the march.

In a major victory for the campaign, Mashaba was forced to 'clarify' his xenophobic statements as having been misinterpreted!

President Jacob Zuma finally made a public comment the day before the MCR march, but this was only because the South African cellphone operator MTN's Nigerian offices were attacked in retaliation to violence targeting Nigerians.

Disgracefully, his message was one of irritation that anti-immigrant sentiment is also normal in Europe but it does not get labelled as 'xenophobia'!

When the possibility of withdrawing permission for the MCR march began to be debated in the media, the ANC-led South African National Civic Organisation and ANC-led Congress of South African Students intervened to mediate between the organisers and the Pretoria West police to ensure it went ahead as a 'peaceful' march - albeit still a xenophobic one!

The Somali community in particular responded to the call to organise community self-defence. On the night of the MCR march WASP leaders attended a community meeting in Pretoria West and played a direct role in organising patrols.

In one area at the heart of the violence, WASP members reported that known ANC Youth League activists were trying to organise and incite looting against foreign businesses.

In the end, the MCR march was a dismal failure. The organisers themselves blamed WASP for this.

The anti-xenophobia coalition decided to go ahead with its own march that would put the issues of tackling crime and poverty at its heart.

By now the coalition had been joined by an organisation of hawkers and small traders from Mamelodi itself who marched under slogans including "the mall is taking our jobs, not our African brothers".

In stark contrast, however, to the tacit support of the authorities for the MCR march, the coalition's march was obstructed at every turn. In the end it went ahead as an 'illegal gathering'.

While the immediate threat of widespread xenophobic violence appears to have receded, the task of organising communities - uniting foreign residents and local - is just beginning. With the successes of the campaign under the coalition's belt, the strategic task of forming a country-wide socialist civic federation can take steps forward.