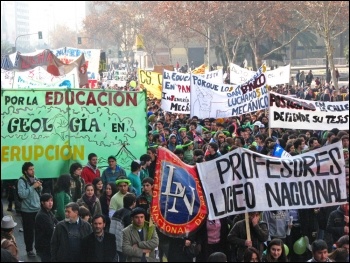 Social and political convulsions characterise the last decade in Chile. The heroic student movement has been at the forefront, organising periodic mass demonstrations, occupations and strikes. This is part of a wave of radicalisation and struggle as Chile's post-dictatorship 'democratic' system moves into crisis.

The legacy of that brutal dictatorship continues. While formally extinct, the "transition" to so-called democracy left intact the dictatorship's state machine - and even constitution! This has been highlighted by brutal state repression and torture against protestors, including members of Socialismo Revolucionario.

One particular recent case involved TC, a 15-year-old member. For the crime of carrying a 'suspicious bag' - a school bag - he and a friend were arrested. Once hauled into the police van, he was brutally beaten by multiple police officers.

During this beating, police employed a notorious torture technique called 'the telephone'. This involves punching the victim in both ears at the same time, causing them to lose balance and consciousness.

When the van arrived at the station, TC's injuries were recorded officially. However, he was then suspended in the air and carried violently by the throat down flights of stairs, cutting off his breathing.

Our tortured comrade reported that, throughout his ordeal, his abusers shouted again and again that this was the result of protesting and he had better stay home in future.

Members and supporters of Socialismo Revolucionario acted immediately. The progressive parents' and guardians' organisation Opam, launched by our members, demanded and won an audience with the chief of the supreme court within 24 hours.

This one incident is symptomatic of the wider problem of state torture and repression. Torture is not even a crime in Chile, and allegations of police abuse are dealt with in secretive military courts which encourage impunity.

There have also been widespread reports of security forces sexually harassing and abusing young women on protests. And while the focus has been on student demonstrations, workers' organisations and indigenous peoples are subject to the same attacks - and worse.

Socialismo Revolucionario argues that only mass struggle can end this injustice. Such a struggle must demand:

We link the struggle for these democratic demands with the struggle against capitalism, which props up this repressive regime to defend its profits. We fight for socialist change.

Socialismo Revolucionario and Opam are discussing with students', women's and indigenous peoples' organisations - to launch a significant anti-repression, anti-torture campaign.

Socialists internationally will have a key role to play in supporting this.