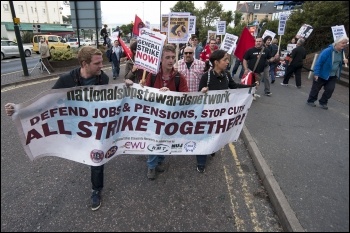 Why I'm going to the conference

The 2014 National Shop Stewards Network (NSSN) conference will take place just days before over one million workers could be taking action against cuts in our pay.

If the ballots are successful, members of Unison, GMB, Unite, PCS and NUT could all be taking action together - something the NSSN has been fighting for over the last few years. There are also other workers, like firefighters in the FBU, with live disputes.

But what next? Many union members refer to being 'led up to the top of the hill' in the pensions dispute of 2011 only to be left well and truly stranded by the likes of Unison general secretary Dave Prentis. Little wonder that stewards in my workplace have said: "This can't be allowed to happen again."

The NSSN conference will be the best opportunity to meet and discuss with union militants from across the public and private sectors, to exchange experiences and ideas about building and rebuilding workplace organisation in order to fight against austerity and for workers' rights.

As well as hearing from shop stewards and some of the fighting general secretaries, a stand out highlight will be the speaker from the 15 Now campaign in the USA which scored a historic victory in Seattle (see above).

All trade union activists should attend, make sure you are there!

NSSN is pleased to announce that Ginger Jentzen will be speaking at our national conference. Ginger is one of the leading organisers for 15 Now, the campaign which mobilised the grassroots effort to win a $15 an hour minimum wage in Seattle.

She organised the 26 April national 15 Now conference in Seattle, attended by hundreds of activists from across the country, and was an elected coordinator of one of the eleven 15 Now action groups, made up of neighbourhood activists who organised the ground campaign for $15.

Ginger is a member of Socialist Alternative (co-thinkers of the Socialist Party in the US) and in 2013 worked in Minneapolis for the Ty Moore election campaign that fell just 200 votes short of winning a second socialist council seat, next to the successful campaign of Kshama Sawant in Seattle.

Ginger got involved in the Occupy movement in 2011 and then in its successful Minneapolis offspring "Occupy Homes" that defended working class families in the south of Minneapolis against foreclosures and mobilised neighbourhoods to stop banks from evicting homeowners.