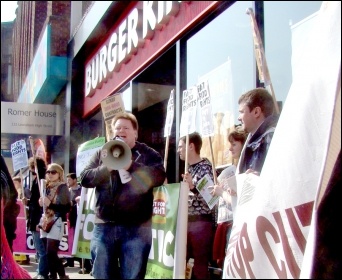 Bakers Union National President Ian Hodson on a protest for a £10 minimum wage, photo by Jim Jepps   (Click to enlarge)

'Because the bills keep coming and the rent won't wait'. This slogan, a version of which was used by Seattle's victorious $15Now campaign, makes the case for raising the minimum wage devastatingly clear.

In Seattle, big business funded politicians argued that multi-billion dollar companies 'couldn't afford' higher wages. But for workers, not affording things means the gas cut off, an eviction notice through the letterbox or a knock at the door from a bailiff. So when McDonalds' CEO says his company is feeling the squeeze, we know to take it with a pinch of salt.

Back in Britain, the economic recovery is apparently now in full swing. More than six years after the financial crash, national GDP is finally back where it was in 2007. But any expected fanfare greeting this news has been muted.

Tory Chancellor George Osborne was at pains to explain that the tough times are here to stay. His caution is an indication of something even the most out-of-touch politician understands: with never-ending austerity and ever-shrinking wage packets - there's no recovery for us.

Any recovery ordinary workers do experience will have to be fought for. Just like in Seattle, where a mass grassroots campaign - combined with the election of Socialist Alternative's (co-thinkers of the Socialist Party in the US) city councillor, Kshama Sawant - succeeded in defeating big business, the Socialist Party says that here too, we will have to organise if we want a better deal.

Inspired by the success workers have had in the US, the campaign to raise the minimum wage here is getting underway. The call for £10 an hour has won the backing of large numbers of trade unionists, low-paid workers and campaigners.

The Bakers' Food and Allied Workers' Union (BFAWU) - who initiated the Fast Food Rights campaign - were the first union to back a call for £10. Since then, the GMB has got behind the fight. Youth Fight for Jobs and the National Shop Stewards Network are proudly working alongside these unions with the aim of building the kind of movement capable of winning a minimum wage workers can hope to live on.

To those who argue that this minimum wage rise would be 'too much too soon', we will ask why there was no such outcry when the average rent deposit rose by over 50% in the last seven years. When multinationals plead poverty, we will demand they open their books to show us where their money really goes.

And when politicians tell us that these difficult times mean workers must be prepared to put up with less, we'll have a simple answer: The bills keep coming and the rent won't wait.