Tough at the top

Spare a thought for the UK's top 1% of earners, currently struggling to get by on a paltry £370,000 a year. According to a new book on inequality by author Danny Dorling these earners actually believe they are in the "squeezed middle", (unlike the top 0.5% of 'earners' such as top company directors).

But before readers get too choked up over how these people will pay for their children's private school fees, there are millions of workers earning vastly below the average salary of £24,596 a year who are struggling to put food on their tables.

The funding crisis in the increasingly fragmented National Health Service (NHS) continues to deepen. Official figures reveal a £500 million deficit of the NHS in England for the first few months of 2014. For the first time self-governing Foundation Trusts have gone into deficit with 86 out of 147 in the red. Of non-foundation trusts, 33 out of 98 were in deficit.

Cutbacks, especially in staffing, are leading to increased waiting times for treatments and will impact on patient care.

Private sector rents continue to escalate pushing more tenants into greater debt. Average monthly rent in England now stands at £761 - or £1,160 in London. Rent controls were abolished by the Tories in 1989.

Unsurprisingly, 8% of rents were either not paid or were late in August. This equals the highest level of people struggling with debt since last Christmas. According to the charity, Shelter: "Our housing market is completely out of control".

The mobile phone retailer Phones 4u has collapsed under a mountain of debt, threatening the livelihoods of 6,000 employees. PwC administrator has warned staff that: "You may not receive the full amount of pay that you'd usually expect to receive", despite Phones 4u having £110 million cash in the bank.

Others likely to be short changed include the taxman - owed £90 million in unpaid VAT and Paye.

However, one party laughing all the way to the bank is private equity owner BC Partners. According to media reports its purchasing and funding arrangements of Phones 4u has allowed it to walk away with an £18 million profit.

Global accountancy giant PwC also pops up in the storm over Tesco's £250 million inflated profits. PwC audited Tesco's books yet the accounts were signed off despite 'irregular movements in commercial income'. Readers can draw their own conclusions. 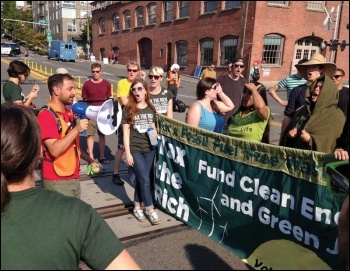 Jess Spear (centre) was part of a 200-strong protest that blocked a BNSF coal train from going through Seattle, photo by Socialist Alternative   (Click to enlarge)

Following the People's Climate March in Seattle, Jess was part of a 200-strong protest blocked a BNSF coal train, forcing it to retreat. "We will stop these oil and coal trains putting downtown Seattle in danger and contributing to the global climate disaster," said Jess.