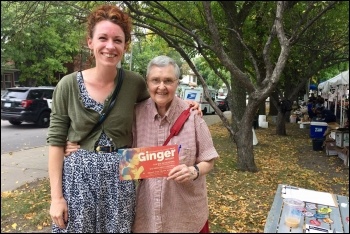 Calvin Priest and Bryan Koulouris from Socialist Alternative (Socialist Party co-thinkers in the USA) report on the second place finish for socialist Ginger Jentzen in the Minneapolis election.

On 7 November, the Ginger Jentzen campaign won a historic vote in the race for Minneapolis City Council, Ward 3. The initial six point lead on election night was fitting for our powerful campaign which had defined the issues in this year's city elections from the start.

But while Socialist Alternative's campaign struck a powerful chord and won more first choice votes than any other campaign, when the third and final round of the ranked choice voting (RCV) was done the following day, we had lost by a thousand votes.

We put a discussion about rent control back on the map and received widespread support from working people for our call to tax big developers and the rich to fund affordable housing, education and mass transit. We mounted one of the strongest ground games in an election campaign that Minneapolis has ever seen.

Ginger won on first-choice votes, but the establishment used stalking horses to divert second and third-choice votes to its preferred candidate   (Click to enlarge)

The result was a major victory for socialist politics. We won in every precinct except those in wealthy downtown Minneapolis. In working class neighbourhoods there was a powerful dynamic as thousands of people were inspired by our bold demands and call for a political revolution in city hall.

The high level of support was palpable. Red and white vote Ginger Jentzen campaign signs were to be found on virtually every street in working class areas in Ward 3, with "not for sale" written across them in bold letters.

This main slogan indicated that the Ginger campaign accepted no corporate or developer donations, and was entirely funded by ordinary working people. We shattered all prior records for a Minneapolis city council race, with more than $175,000 raised without a penny in corporate cash and a median donation of just $25.

In neighbourhoods around the University of Minnesota, made up of predominantly student renters, our campaign tripled student turnout and won by over 50% in the precinct overall. 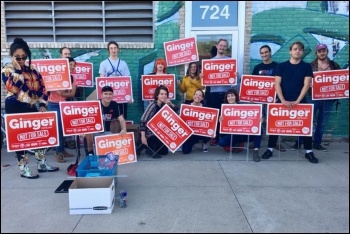 Some of Ginger's campaign team, photo by Vote Ginger Jentzen   (Click to enlarge)

But the vote was highly polarised, and the areas downtown dominated by luxury apartments and condos went just as strongly for the DFL candidates (Democratic Farmer Labor Party, the Democratic Party in Minnesota). This was on the basis of class interests but also due to the deep roots of the DFL.

The stage was set for a historic election campaign this summer when Minneapolis City Council was forced to pass a $15 minimum wage under the leadership of Ginger and Socialist Alternative - who launched 15 Now and built a broad coalition of unions, progressive organisations and activists.

This coalition brought huge pressure to bear against the majority of the city council and the mayor who had said that $15 was too high, not in the domain of city government, and impossible.

Our campaign faced the united opposition of the political establishment, corporate media and a last minute rush of pac (political action committee) money into the race, backed by big business and for-profit developers.

The billionaire-owned StarTribune's editorial board spoke for Minneapolis big business leaders when it penned its "anybody but Ginger" endorsement article in which it ranked and made the case for all three of the other candidates in the race: Democratic (DFL) establishment candidates Steve Fletcher and Tim Bildsoe as well as Green Party candidate Samantha Pree-Stinson.

Big business was threatened by our independent socialist campaign. Millionaire developer Steve Minn and his "Minneapolis Works" pac singled out Ginger in their "call to action" in mid-October, saying: "If you thought it was impossible for a committed socialist to run on a platform of rent control and establishing a municipal income tax... meet: Ginger Jentzen," and warning that she was a "leading candidate" in Ward 3. Corporate money quickly began to pour into the race.

Six pac mailers landed in the ward in the final weeks backing Tim Bildsoe. Meanwhile, three attack mailers went out calling Ginger "nuts" for wanting to tax the super rich and big business and advocating for rent control and with the outright lie that Ginger wanted to create "new taxes on working families."

Our campaign's strong result showed that Seattle is in no way an aberration in supporting independent socialists, with city council member Kshama Sawant's campaigns. As Socialist Alternative has explained before, the hunger for bold working class politics exists all across the country. 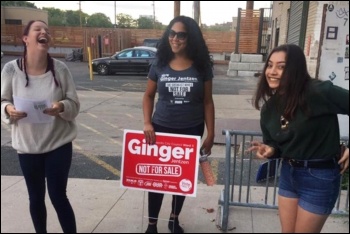 Some of Ginger's campaign team, photo by Vote Ginger Jentzen   (Click to enlarge)

And while many who voted for us don't consider themselves socialists, the socialist label is not a barrier for ordinary people. Ginger running openly as a socialist was in fact an asset, with many young and working class people who had supported Bernie Sanders in 2016.

The campaign took on something of a national left profile, receiving coverage in several prominent media outlets, including The Nation, The Intercept and The Young Turks, as well as a series of stories in major local media of the StarTribune and the front cover of the main Minneapolis weekly, the City Pages.

We won endorsements from several key left unions, including ones that had endorsed Bernie Sanders, like the Minneapolis Nurses Association, Communication Workers of America MN council, and the United Transportation Union.

Ginger was also endorsed locally and nationally by the Democratic Socialists of America, as well as the local Our Revolution.

The campaign and coalition we built will help lay the basis for a struggle for expanded mass transit and rent control in Minneapolis over the coming months.

Ginger's campaign shows the popular support for rent control, and this can be built upon to fight against the big developers and their attempts to turn Minneapolis into a playground for the rich.

The Minneapolis establishment made use of the ranked choice voting system against our independent socialist campaign. When the weaknesses of Fletcher's campaign became apparent it led to the late entry of Tim Bildsoe into the race in mid-August.

The other candidates ultimately delivered the second and third choice votes that the DFL needed to win to Steve Fletcher, including the Green Party candidate Samantha Pree-Stinson. This shows not only that RCV is not a panacea, but that it can even be used as a tool by the establishment to attack independent campaigns.

Of course, in the absence of RCV the race would have had a different dynamic. There is no doubt that

"lesser evil" arguments would have been used against our campaign to push voters toward Steve Fletcher saying it was necessary stop the more conservative Tim Bildsoe, who ran under the Democrat label after serving on a suburban city council for 16 years as a Republican. 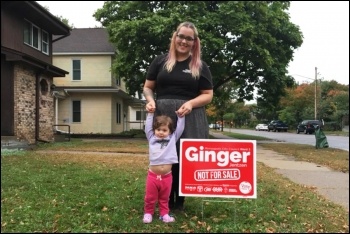 One (or two?) of Ginger's supporters, photo by Vote Ginger Jentzen   (Click to enlarge)

The candidate who most openly and fiercely attacked the Ginger Jentzen campaign was the Green Party's Samantha Pree-Stinson. She was formerly an establishment Democrat who chaired committees and actively built the Democratic Party for years until earlier this year when she sought the Green Party endorsement.

She was endorsed and backed by the Green Party in spite of running clearly to the right of Democrat Steve Fletcher. She made statements against the $15 minimum wage and attacked the campaign for supporting movement demands like "black lives matter", "Medicare for all", and "no ban, no wall, no raids", while herself not supporting rent control or taxing the rich.

Unfortunately, the national leadership of the Green Party amplified Pree-Stinson's campaign despite multiple appeals from Socialist Alternative members for them to encourage second-choice votes for Ginger.

Across the country, many candidates backed by 'Our Revolution' and the Democratic Socialists of America were elected. This is an extremely positive development, but it will also be a test to see if they can withstand the pressure of the corporations, big developers, Democratic Party and political establishment to tone down their politics.

In Seattle, we've shown how just one elected office for the socialist movement can transform city politics if connected to a clear programme, mobilisation of working people from below and building an independent organization.

A new generation of workers is losing faith in the bankrupt system of capitalism and searching for an alternative. Socialism is rising again.