■ Trade union rights for all 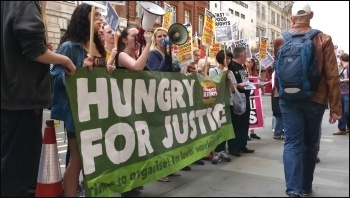 Join a union to fight the culture of despair

Employers around the country - large and small, including the public sector - have created a culture of despair.

Poverty pay means millions cannot afford the basics they need for a decent life. For many working class people, the only chance at living normally lasts for a week after payday - and then the overdraft is their best mate. Or even worse, they become far too familiar with local foodbanks and rip-off payday loan companies.

We hear many worrying stories instigated by this current government and peddled by the right-wing media. 'Working people pay tax, so others can stay out of work and live off benefits!' This is just totally untrue; a myth.

It's a myth because the vast majority of those who claim benefits are actually in work. The reason they claim is because wages are too low and getting lower as they fail to keep pace with inflation. The minority who aren't working can hardly be blamed for there not being enough jobs to go round.

The government talks about "scroungers" earning more from benefits than workers. But on the rare occasions this is true, it isn't because benefits are too high - in fact, they are mostly set at starvation rates. Instead, it is because the pay rates on offer in the world of work are pitiful. Work needs to pay, and pay properly.

The real scroungers are private firms that don't pay a living wage. They are essentially taxpayer-subsidised by benefits so their workers can live.

This is at a time when most companies are sitting out the economic storm by piling up cash. They are paying staff peanuts while bosses hand themselves bigger and bigger pay packets and perks.

In addition, it is estimated big business is sitting on around £800 billion in the bank, unspent. Bosses see no profitable outlet for it in an uncertain economy. This could all be used to invest in more jobs and better pay, but instead is widening the gap between rich and poor.

Friends of mine, despite working, have spoken of having to sleep in their hoodies as they can't afford the heating. Or they have had to move back in with their parents because their wages are so low. Pay rises, even below-inflation 'rises' that are real-terms pay cuts, are non-existent for most.

A fellow workplace representative for shop workers' union Usdaw got active after wondering why they never had any cash. They worked out that during a standard month they earn £500.36 - and they stress the 36p really counts!

They travel over an hour from home to Cardiff city centre just to get to work. This alone sets them back £360 per month in fuel and parking costs. There isn't any work closer to home.

This means that, after travel costs, they're left with a pitiful £140.36 to last the month. This is the reality for many working class people of all ages right across the country.

The so-called 'recovery' hasn't penetrated past the boardroom. Workers everywhere are still having wages frozen or cut.

This comes after six years of devastating recession and austerity. But even before that, during the 'good times' under New Labour, workers' wages actually fell in proportion to bosses' pay.

The response to the crisis of low pay from the political establishment has been woeful.

Prime Minister David Cameron has cynically called for workers to get a pay rise as we approach the general election. This is a "sick joke" according Mark Serwotka, general secretary of public sector union PCS. His members, employed by the government Cameron heads, haven't seen a pay rise in years.

Meanwhile, the 'opposition' - in the form of Labour and the growing Green Party - has made pledges well short of what workers need. The Greens have pledged to implement a £10 an hour minimum wage - but not till 2020. By that time Labour is pledging only £8 - a measly 30p a year, which could well be cancelled out by inflation.

Bills, rent and mortgage payments won't wait until 2020, and neither can we. The Trades Union Congress (TUC) is committed to campaigning for a £10 an hour minimum wage now, not in five years. This follows a resolution last year moved by bakers' union BFAWU.

BFAWU is fighting to organise downtrodden catering and retail workers to fight for a living wage and fair treatment at work. Working with campaign groups, including Youth Fight for Jobs, it has launched "Fast Food Rights" - inspired by events across the Atlantic.

In Seattle, low-paid workers have won one of the highest minimum wages in the world: $15 an hour. They did this, in part, by organising collective action in their workplaces to put pressure on bosses - including walking out on strike so the company couldn't make any money. This is why it's vital to join a trade union if you want a better life at work. 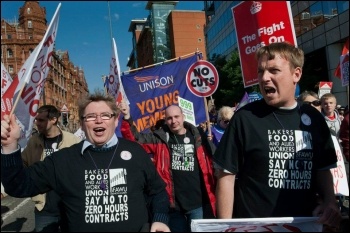 Decisive in this battle was Socialist Alternative, US co-thinkers of the Socialist Party. In a historic election campaign in November 2013, Socialist Alternative member Kshama Sawant was elected to Seattle city council. She was able to use pressure from low-paid workers and activists to extract concessions from bosses and their politicians.

The "15 Now" campaign is rapidly spreading to other US cities. There is no reason why a similar campaign can't be successful here.

A glimpse of what's possible was seen in the 150,000-strong TUC demo in London last October demanding a living wage. Recent industrial action taken by NHS workers over their pitiful pay offer is another.

Imagine this power, harnessed and organised by the unions into escalating, coordinated national strikes. The demand for £10 an hour would be just the start of what we could potentially win: an end to austerity, and maybe more.

Even action limited to single workplaces can win big. Young workers at the Ritzy cinema in London got a massive 26% pay increase out of their bosses after they organised strikes.

But just like in Seattle, political representation is essential. This is why the Socialist Party helped found the Trade Unionist and Socialist Coalition (TUSC). TUSC is standing over 130 candidates in May's general election and several hundred in England's council elections.

Whoever forms the government after May will be committed to austerity. None of the capitalist parties is committed to lifting workers out of poverty.

This means the struggle for a living wage will continue.

We must fight to organise unorganised workplaces, expanding the trade unions that can help us all win a better life at work. We must also campaign within those unions for a fighting strategy, and pressure the TUC for effective, coordinated action.

And finally, we must build the working class alternative to the bosses' parties. TUSC is taking huge steps towards this.

The culture of despair must go. So until the bosses and government pay us a living wage, let's make their lives a living hell! 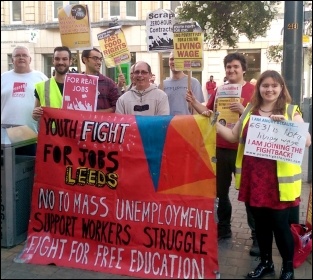 Being on the minimum wage is boring as well as stressful.

There is only so far you can stretch £6.50 an hour, and being on a 'flexible' contract means not even knowing how many £6.50s I'm going to get per week. Going out and enjoying myself, learning to drive and many other things become very difficult. There is rent to pay as well as rising prices for essentials such as food and utilities which I help my parents pay.

You would think getting two jobs would make life easier. It would mean having more work and so more money. So I did!

I worked in Morrison's and KFC. Morrisons was a unionised job, with better conditions, more solid hours - you knew when you were working. KFC is a casual contract: not zero hours, but they can give you less than your contracted hours. It's not unionised.

When you're working them both you see the differences. You see a contrast in the way the workers are treated.

But because I had two jobs, the tax was much higher. You can't just get a second job and earn more money because you pay "emergency tax". You can claim it back, but that's no good at the time. You end up working two jobs for around the same amount of money.

My social life was impacted big time. I'd find myself doing an early morning in Morrisons, 5 till 2. Then 4 till 12 in KFC, then another 5 till 2 in Morrisons the next morning. You don't want to refuse in case you get punished in next week's rota.

It's not just about not having a social life, it's about not getting a lot of sleep. It affected my health: I was tired the whole time.

I could work up to seven days a week some weeks and still not get enough to live on overall. I wasn't getting any money for stuff like drinks or going away for a few days. If I did spend even a little on myself, I'd end up using my overdraft, then having to pay it off, and not having any money the next month.

Overall it would mean a better life - and not just for me, but for all working class people. 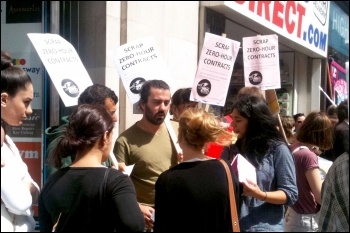 Ed Miliband, leader of the Labour Party, has announced he wants a "12-week limit" on the use of zero-hours contracts. Unfortunately one of his named employer party donors had used unpaid interns! Labour won't win young workers' votes like this.

Clearly, Labour is feeling the pressure of campaigns like Youth Fight for Jobs and the huge anger that exists at the scandal of zero-hour contracts. But Miliband's promise goes nowhere near far enough.

This pledge does not "ban" zero-hour contracts as he claims. It could even lead to employers systematically firing and rehiring workers before a three-month period, adding to insecurity.

It would be good to see Labour actually backing trade unions putting up a fight over zero-hour contracts. And campaigning for £10 an hour now, not £8 in 2020! That's why I'll be joining protests on 15 April.

This day of action is part of global protests taking place against low-pay and casual work. In Britain, Youth Fight for Jobs is working alongside bakers' union BFAWU as part of the Fast Food Rights campaign.

On 15 April actions will take place across the country as part of a "join a union day". We want to help unorganised workers get organised and fight for a better deal.

■ Supporting fast food workers striking in the US 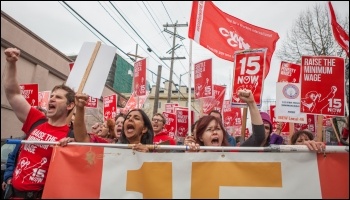 Thousands of workers in Seattle have had a raise this month after a mass campaign, including action from Socialist Alternative city councillor Kshama Sawant, secured a $15 an hour minimum wage. Fast food workers across the US are fighting for $15, including a big strike this week photo Alex Garland 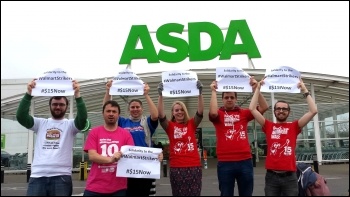 What is a trade union?

Trade unions are there to work for you in your workplace. They help you organise with colleagues to get a better deal out of your boss.

Trade unions can help you get more pay and better treatment at work. Join and help organise your colleagues to work together.

Without working people doing things collectively to pressure their bosses and governments, we wouldn't even have weekends! Every right you have at work has been won by people just like you organising with their fellow workers through trade unions.