Interview: We Are the Lions, Mr Manager 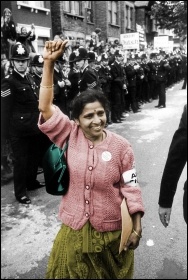 Forty years ago, super-exploited workers at Grunwick Film Processing Laboratories in London were on strike.

Most were migrant Asian women. They demanded trade union recognition and the reinstatement of sacked colleagues.

So why the Grunwick strike?

Neil: It was a watershed moment, really. It was a major event in the mid-1970s. A battleground between the right and the left.

The 'National Association for Freedom' [a right-wing anti-union front] and the right wing of the Conservative Party saw it as an opportunity to start their assault on the trade unions.

Between them, this small event in north London became a massive national campaign on both sides, a way to build up their respective stances on the future of this country. There was a great debate about what the role of trade unions should be.

The union rank and file, as always in these events, showed its vast difference with the leadership. There was a massive difference when it came to supporting the Grunwick strikers. The strikers did feel let down in many ways by the trade union leadership.

It lasted two years, 1976-78. It was astonishing really. It was led mainly by Asian women, and that's what made it more extraordinary.

There were a handful of strikes led by immigrant workforces, like Imperial Typewriters in Leicester. But this was the first major strike by Asian women in this country.

Grunwick was instrumental in changing attitudes to race and migrant workers within the labour movement.

And Medhavi, you play one of the strikers?

Medhavi: I play Jayaben Desai. She was the first woman on the picket line, along with some of the others who walked out in support of her, and so she led the strike.

And you're 'Mr Manager', Neil?

The pressure of the work, the pressure of upper management on middle managers to get the work through as quickly as possible. Because they were undercutting big companies like Kodak and so forth.

They paid poor wages, insisted on compulsory overtime. The workers were ruled with an iron rod by the mail order department, his department.

A lot of commentators, a lot of MPs, said they were Dickensian conditions. They weren't: this was the future of industry. We now see it, in glorious Technicolor, with Sports Direct and Amazon and so on.

Alden had the foresight to see the potential, taking on immigrant workers and treating them badly - and thinking they wouldn't answer back. He picked on the wrong person this time!

[During the strike] they bought a double-decker to get his 'loyal' workers in so they didn't have to face the pickets. And Malcolm Alden used to drive the bus.

This is an important piece of history, then.

Neil: It's the birth of neoliberalism. This is the starting point.

It's interesting to see who was behind the National Association for Freedom. That's the people who then started to campaign for Thatcher and get behind Keith Joseph [architect of Thatcherite economics] and so forth.

I see that Jacob Rees-Mogg is trying to start it up again. We get to meet them.

They gave [Grunwick owner] George Ward a load of money and fought all his legal battles for him. They dragged the whole strike through the courts as much as possible.

The postal workers refused to deliver the mail to Grunwick. It was nearly game, set and match. They got the courts involved. That's when the union leaders said 'we can't have that! Run away! Run away!'

Is the story still relevant today?

Medhavi: Oh my god, yes! Immigrants get the blame for the state of the country. There's zero-hour contacts; the gig culture, the gig economy. People aren't getting paid what they deserve. It's all come full circle.

More and more people are on the breadline. There never used to be foodbanks. People are desperate to get work. There are those who want to exploit these people, immigrant or not. It's very relevant.

But where does it go to? How quickly does it get swept under the rug? Who knows about the Grunwick strike today? These sorts of things should be taught in schools. Young people can fight for their rights.

Townsend Productions is known for creative staging. What can audiences look forward to this time?

Neil: It was a big challenge this one, it's a big story. We always try to reflect the period. There's a rock concert in there.

Medhavi: You're not supposed to say that, that's meant to be a surprise!

Can we print that or not?

Neil: Yes, you can print that. There's a very inventive set.

Neil: I also play Jack Dromey [then president of the local trade union council and a key supporter of the strike; now a right-wing Labour MP].

I play John Gouriet [of the National Association for Freedom] - an ex-army officer-type chap. I play a copper - all those aspects of the strike, I tend to play. Medhavi gets the easy option and just plays one.

Medhavi: I play two, thank you very much!

What's really cool is we use projection on the set to put ourselves in different periods. It becomes part of marches, part of pickets.

I think there's a really bad rap for political theatre, it can be dreary, but this is a proper show. It will keep you entertained, engaged - emotionally engaged as well.

Neil: There's songs as well, songs from the time.

It's a fantastic way to engage different audiences and show them that everyone's struggle is the same, regardless of what colour or caste or creed you are.

Discussions include: 'Can art and literature provide a voice for the left?'

This version of this article was first posted on the Socialist Party website on 26 October 2017 and may vary slightly from the version subsequently printed in The Socialist.