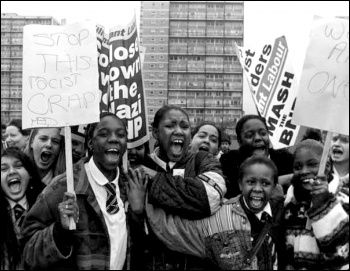 Hugo Pierre spoke to the Socialist about the history and lessons of the struggle against the far right in the borough.

What was the background to the campaign in Brick Lane?

I can remember there being a fascist-type paper sale going back to when I was a teenager - the National Front, the BNP - which had been disturbed on a few occasions but had always reappeared.

There'd been a rampage in the Brick Lane areas in the 1970s, and that was resisted - it was the beginning of resistance from the Bengali youth, who fought back and at one stage managed to stop the fascists from selling their paper.

A number of us had been to Belgium for the Youth against Racism in Europe (YRE) march in the autumn of '92.

We decided to take that campaign and materials from that demonstration to some of the local youth clubs.

We were able to take young people with us on the coach to the first demonstration in May 1993 against the BNP headquarters after Stephen Lawrence had been murdered.

How was the campaign linked to the fight to remove Derek Beackon as the first BNP councillor in Tower Hamlets?

We started our campaign in the summer of 1993, before Beackon was elected.

BNP activity had led to racist incidents in the area. One young person - Quddus Ali - had been quite viciously beaten up.

There was a lobby outside the hospital where he was being treated, of about 5-600 youth. That was attacked by the police, although the young people were able to prevent the worst excesses of the police brutality.

Then the BNP won this seat on the Isle of Dogs on 16 September, so we stepped up our campaign, but also our campaign became more popular as a result.

The workers for Tower Hamlets Council on the Isle of Dogs went on strike the day after Beackon was elected. That gave a big boost.

So who was involved in the campaign?

YRE had started to develop in a number of colleges and youth clubs around London, and also around the country.

There was also a black organisation called Panther that was also doing some work, especially after the Stephen Lawrence murder. Militant Labour [now the Socialist Party] members were active in both.

A lot of the local youth gangs declared a truce around the BNP election, because they could see that the potential for racist backlash in the borough was quite high. Out of this the Youth Connection group was formed.

In September we launched a campaign for a joint demonstration, which then attracted 3,000 people in October.

But we also decided to organise a static demonstration on the spot where the BNP had their paper sale.

So how did you organise this?

We organised a big public meeting at a local community centre in Whitechapel. 2-300 people came along to that meeting - young people, predominantly Bangladeshi youth.

Although there'd been a lot of Militant supporters, including myself, who'd been expelled from the Labour Party, we still had one or two points of contact in the Labour Party who were on the left. They agreed to speak at the meeting.

We followed up that meeting with a big campaign, particularly in the western part of the borough. Leafleting estates, leafleting youth clubs, going to speak to young people in youth clubs, on the street - wherever we could.

We agreed that on the Sunday morning, we were going to take over the spot where they stood.

We all met up at about 8 o'clock in the morning because the market that takes place on Sunday started early.

We took over the spot. The word spread around. There ended up being around 1,000 people, mainly from the local community, on the corner.

The BNP were hemmed in and pushed off. We continued demonstrating in the following weeks to make sure they didn't return.

It was a massive victory, because the far right have not been able to re-establish a regular public activity anywhere in Britain, since September 1993.

How much of a blow to the BNP did the victory represent?

The confidence of young people was really raised, to be able to go out on the streets and challenge racism.

School students organised a strike when there'd been a racist attack outside a school. The TUC organised a demonstration through the borough against racism in 1994 before the council elections. It fed into a big anti-BNP vote on the Isle of Dogs.

So although Beackon's vote actually rose from 1,480 to 2,000, he lost that particular election. Ever since then the BNP's Tower Hamlets vote decreased.

What were the lessons in the fight against the BNP?

I think one of the key lessons is to always give a key role in those campaigns to the youth - make sure that they're given the opportunity to organise, set tactics and direction.

Under capitalist society, there is going to be a level of racism that's being promoted at any one time or another by the ruling class.

It doesn't always get an expression in an electoral way. But it did in 1993. That was primarily because the conditions of people were really driven down, but also as Labour had moved to the right quite substantially.

None of the established political parties were offering any way forward whatsoever. In fact Labour, on the Isle of Dogs, echoed the anti-Asian feeling that was being promoted by the Liberals.

The involvement of the trade unions was absolutely key. We had political demands - jobs and homes, not racism.

It wasn't just a strategy of bringing black and Asian young people, towards YRE. It was also a question of how did that link to the problems that white youth were also facing, in order to bring young people of all races together to fight on the issues that unite them.

What conclusions were drawn from the defeat of Derek Beackon?

After the campaign to get rid of Beackon was successful we also decided, through Militant Labour, to stand in elections.

Some people on the left said we shouldn't stand, we would open the gate for the BNP if we split the Labour vote.

But the Labour Party wasn't addressing the needs of young people in the borough. We had to stand so we could put forward such a programme.

That had a significant impact. We stood in a couple of elections and got creditable votes.

There has to be now, especially with the economic crisis, a political alternative to the austerity programme.

None of the establishment parties are putting that up. In Tower Hamlets we have an independent mayor.

Some measures he's put forward, particularly around student EMA replacement, have had some small impact on young people.

But in one of the most expensive boroughs to live for private rented accommodation, where levels of poverty are still high, youth unemployment is one of the highest in the country - this sticking plaster won't stop an explosion of anger that is going to come out at some stage, especially from the youth.

We think there needs to be somewhere for an anti-austerity vote to go, especially at the next council elections in May.

We're looking to put together a platform around TUSC to do that and appeal to workers, trade unionists, anti-racist campaigners, young people and others to come forward as prospective candidates.

Public meeting: 20 years since the BNP were driven out