Workers and youth: Unite against the far right 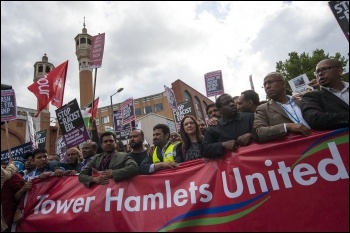 The founder of the English Defence League, Tommy Robinson, along with fellow co-leader Kevin Carroll, have both left the far-right, racist group, leaving the EDL in disarray.

But remaining EDL supporters claim they still aim to whip up fear and division with a demo in Bradford on Saturday 12 October. Local workers and young people are mobilising to stop them.

Unite the Union has initiated a demonstration in Liverpool on Saturday 12 October to show that trade unionists can and will organise to defeat the far right as part of the fight for jobs, homes and services.

The EDL resignations follow humiliating defeats for the far right. In Waltham Forest, east London, last year, the Socialist Party, Youth Fight for Jobs and the Day-Mer Turkish-Kurdish community group linked up with local youth to break out from a police pen to stop the EDL from completing a march and holding a rally. Many EDL supporters then called for Robinson's resignation.

Last weekend the British National Party tried to demonstrate against immigration outside a Home Office building in Croydon.

But the 20 BNP supporters were marginalised by 50 anti-racist protesters, led by the local trade union council and PCS members who work in the Home Office.

It's the main parties, their banker-spiv backers and the capitalist system that are to blame! But, the far right tries to shift the blame onto any 'minority' they think is an easy target, potentially splitting and weakening anti-cuts movements.

Mass action to fight for trade union policies for decent wages and working conditions, an end to the bedroom tax, money for council housing not war, and so on, are the real alternative to the greedy fat cats and their pro-cuts politicians - not racism.

Counter-demonstrations organised by trade unions, appealing to local communities, against every far-right event and attack can be built, linking opposition to the far-right with the day-to-day concerns of all working class people.

The far right in Liverpool had no base during the 1980s. This was largely due to the way the socialist-led council inspired and organised massive resistance to Thatcher's Tories and won back £60 million in funding for the city.

But today's Liverpool Labour council, like all others, are carrying out the Con-Dem cuts.

The Trade Unionist and Socialist Coalition looks to stand widely at next year's council elections. Our candidates will argue for a fighting programme linked to struggle that includes axing the bedroom tax and banning zero-hour contracts, in favour of creating jobs and building council housing, restoring public services and pensions and people's benefits, for workers' rights and decent wages and democratic nationalisation of the banking system.

These are answers that neither the mainstream parties nor the far right can provide. All working class and young people need to unite and fight for jobs, homes and services.

March in Liverpool against racism and fascism