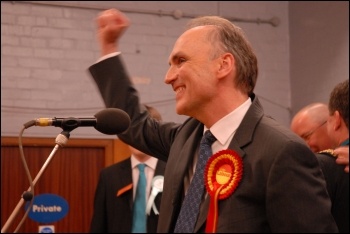 We send you our solidarity against the unfounded attack on your reputation and unwarranted suspension.

The attack and suspension is one of the numerous attempts by the right wing of the Labour Party to undermine Jeremy Corbyn.

Your suspension will not stop the attacks nor stop the use of false accusations of antisemitism as a battering ram against the left.

While any Labour Party member who indulges in antisemitic remarks or any racist, homophobic or other inappropriate behaviour should be investigated, there needs to be evidence.

It is a grave mistake for those who claim to be Jeremy Corbyn supporters to be taken in by unwarranted attacks and unwarranted claims of antisemitism or other inappropriate behaviour, when it is clear this is a political attack on you and a proxy attack on Jeremy.

The right wing is using allegations of antisemitism as they know antisemitism is quite rightly linked in the minds of the population with the terrible crimes of the Holocaust and of fascism - a political ideology and movement that was also used to smash up the organisations of the working class and democratic rights.

Your strong support for increased accountability of Labour MPs will have infuriated those MPs who see parliament as a career and who defend the capitalist system.

If you organise a speaking tour to defend your reputation and to continue your campaign for greater democracy, and for the delivery of Jeremy's policies, we will certainly support your meeting in the Derby and Nottingham areas (and would help organise it if you so wished).

We believe Jeremy and John McDonnell need to be more proactive in arguing politically against the right wing of the Labour Party and also in organising against them. This includes the current deputy leader, Tom Watson, who has been undermining Jeremy.

You may not recall that one of our members chaired the public sector union Unison's South Derbyshire Healthcare annual general meeting when you spoke at it.

He would like to say that at no time in that meeting did you say anything that would have justified the scurrilous allegations against you; he would say that you spoke as one would wish other Labour MPs to do and which few do (with honourable exceptions).

Although we may not agree on every political issue - such as how Labour-led local authorities should fight the cuts and the Socialist Party's support for a pro-worker socialist EU Exit - that does not in any way mean that we do not defend you against your suspension.

We believe that Labour councils should refuse to make cuts, using reserves and legal borrowing powers to give themselves time to stand up and really fight for proper council funding, building a mass campaign involving the council trade unions and the local community. Local councils making cuts undermines the Labour Party.

You may be aware of the Socialist Party's call for the convening of a labour movement conference to draw together all socialist fighters, trade unionists and anti-cuts activists to discuss and debate how Labour could be changed into a 100% anti-austerity party.

Our two branches hope you will support this as well as the re-admittance of the 75 members of ours that continue to be excluded from the Labour Party (with over 1,000 years membership between them, including one of our local member's with approx. 20 years membership).

Despite any differences, what unites us is campaigning for a Jeremy Corbyn-led socialist Labour government and increased democratic accountability within the labour movement.

We believe a way to help defeat the pro-big-business wing of the Labour Party is to campaign for pro-worker, no cuts policies AND to organise for:

Once again, please accept our solidarity.

On behalf of Derby and Nottingham Socialist Party branches