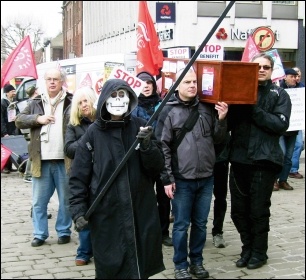 A 'die' in was held outside Chesterfield Jobcentre as part of a Unite Community national day of action agianst benefit refusals and sanctions, 19.03.15 , photo by Elaine Evans   (Click to enlarge)

"If you commit a crime, no court is allowed to make you go hungry as a punishment. But if you're late for an appointment at the Jobcentre they can remove all your income and leave you unable to feed you or your family for weeks." (Church Action on Poverty)

Last year, over one million people had their benefits sanctioned under this callous government regime. That figure includes 100 people a day who have severe mental health problems.

The Department for Work and Pensions (DWP) has recently reviewed 49 cases involving the death of a benefit claimant, but would not say how many cases involved claimants subjected to a sanction.

Darren, a Jobseeker's Allowance claimant from Leicester, has been sanctioned, without proper justification, following a new DWP pilot scheme involving daily signing at a Jobcentre. Darren explains what happened.

"Recently I was forced into daily Jobseeker's Allowance signings at random times. I have now been tripped up. I was ten minutes late to an appointment and have now been sanctioned a full month's benefit. Needless to say, with new council tax and winter fuel bills due I'm up the creek. Regardless, I'm expected to continue with this daily regime without fail.

I want to appeal. It first went to the 'decision makers' who aren't even based in Leicester. I now have to get back to them just to express an interest in appealing before I'm even allowed to commence the procedure!

The most insulting part of this all is that I am digitally logged and proven to be applying for an average of 25 vacancies a week! I have three-hour turnaround in my day to travel and wait on the appointments. It is nothing but a counter-productive hindrance to getting a job.

The sheer disruption of not knowing the time of an appointment from one day until the next is very destabilising. The constant threat of sanctions creates fear and anxiety, which is not conducive to finding work but is guaranteed to promote both deterioration in health and mental state.

I am not a convicted criminal, but I have previously served on workfare for six months! It should also be only fair to further point out this is an attack on civil liberty and basic human rights."