Finsbury Park attack: no to terror, racism, war and austerity! 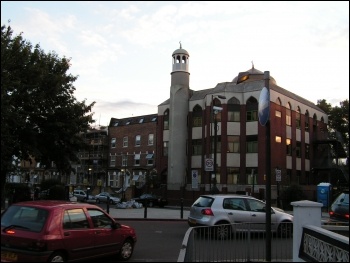 For the second time in one month a van has been driven into a crowd in London with the aim of indiscriminate slaughter of innocent people.

This time the terrorist attack seems to have been motivated by anti-Muslim hatred. The van driver was reported to shout that he wanted to "kill all Muslims" as he drove into a group who had just taken part in evening prayers after breaking the Ramadan fast.

They were standing together to assist an elderly man who had been taken ill and who has now tragically died.

In addition to his death, ten other worshippers were injured by the attack. With incredible self-restraint the group, together with bystanders, captured the attacker and held him, it seems largely unharmed, until the police arrived.

The Socialist Party completely condemns this terrible attack just as we condemned the Manchester and London Bridge attacks which were inspired by the completely reactionary, barbaric ideology of Isis.

In the wake of those horrific attacks, the worst terrorist attacks in Britain since the 7/7 bombing in 2005, there has been a clear danger of an increase in racist attacks on Muslims, or people who are perceived to be Muslim.

Such attacks are repellent to the majority in society who understand that the overwhelming majority of Muslims are completely opposed to terrorism.

In the one day after the London Bridge attack alone, London's Muslims raised £18,000 for its victims.

The electoral surge for Jeremy Corbyn in the general election showed how millions of people understood the need for working and middle class people of all nationalities and religions to unite together against austerity, war and racism.

The horror of Grenfell Tower drives home the urgent need for a united movement to get the Tories out and fight for socialist, anti-austerity policies.

If it had not been for the alarm being raised by Muslims who were awake because of Ramadan and saw the fire, even more would have been killed.

But as it is, residents estimate that at least 150 working class people - of many nationalities and religions - died as a result of criminal capitalist cuts and austerity.

Millions also understand that, as the Socialist Party has consistently explained, alongside opposing the right-wing reactionaries of Isis and their ilk, it is also necessary to oppose the imperialist wars and interventions in the Middle East and Afghanistan which have created a nightmare for the peoples of the Middle East and inevitably increased the likelihood of terrorist atrocities worldwide.

Little is yet known about the identity of the Finsbury Park attacker but it seems likely that he, like the murderer of Jo Cox, was inspired by far-right racist ideology.

The right-wing media and all those capitalist politicians who have attempted to divert attention from their austerity and warmongering by whipping up racism and anti-Muslim and anti-migrant feelings over recent years, bear some responsibility for last night's attack along with other racist assaults.

Theresa May has responded to the attack by again saying there is a need for more 'anti-terror' legislation. However, there have been numerous new 'anti-terror' laws introduced in recent decades and none have stopped new attacks. At the same time the Tories' unrelenting austerity drive is making people more vulnerable when attacks occur.

It is essential that the workers' movement puts uniting against racism at the heart of a fight to end austerity, and for decent jobs, homes and services for all.

This version of this article was first posted on the Socialist Party website on 19 June 2017 and may vary slightly from the version subsequently printed in The Socialist.