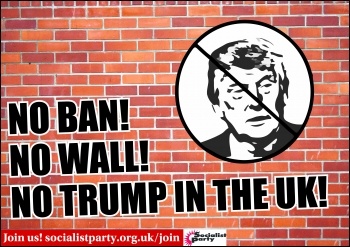 Donald Trump's outrageous travel ban on people from seven Muslim countries and halting the US's refugee programme, has unleashed a huge wave of protest both in the US and internationally.

Responding to live streaming on social media, thousands of people rushed to airports across the US in defence of detained refugees.

In Seattle, city councillor Kshama Sawant of Socialist Alternative (US cothinkers of the Socialist Party) addressed a huge protest rally under the platform banner: "Fight Trump and the billionaire class."

Kshama called for 100 days of resistance culminating in mass marches, civil disobedience and strike action on 1 May, international workers' day.

In New York the taxi drivers' union struck for an hour and declared: "We say no to this inhumane and unconstitutional ban."

Tens of thousands, including Socialist Party members, protested across Britain to condemn Trump and also rail against his new found ally, UK prime minister Theresa May.

And by giving the green light to start building a 'wall' on the Mexican border, he is setting the stage for deportations of undocumented workers at a previously unseen pace.

He has begun to dismantle the minimal Obamacare health insurance and also made clear that environmental regulations are going to be shredded in the name of profit for US coal and oil producers and big business manufacturers.

People fear a man who has glorified sexual assault, incited racist violence and made billions of dollars off the backs of working people.

However, fear is not the only reaction to the new 'Predator in Chief'. Trump's inauguration was met with the biggest day of protest in US history, with the women's marches on 21 January mobilising over three million people into action.

Socialist Alternative says: "This movement must be continued, deepened and escalated to stop the right-wing agenda, including building a new party of the 99% to be an uncompromising force in fighting Trump's agenda."