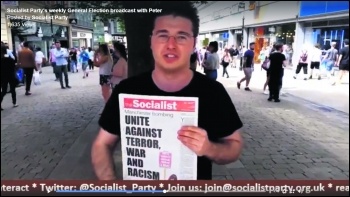 Following the horrific Manchester bombing on 22 May, Socialist Party members in the city have been campaigning against terrorism, war, racism and austerity and continuing our general election campaigning.

Jack Metcalf at the Socialist Party's campaign stall on 27 May said:

Looking towards funding our policing, funding our NHS and the vital services that are threatened with closure which were heavily used during the attack to a point that they wouldn't be able to do so again after the cuts which have been promised.

We've had a really good response from people. We had a bunch of lads really enthusiastically telling us what they thought of Theresa May, so much so that they nearly knocked our stall over!

In general we've had a really warm response, people really looking towards anti-austerity politics. £10 an hour, trade union rights, the NHS and renationalisation are all back on the agenda. It's what people are talking about and they're really pleased to see us saying it.