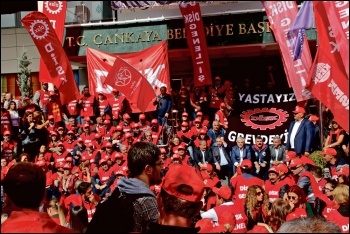 Workers in Turkey responded to the Ankara bombings in October with a general strike against terrorism and state repression, photo by Sosyalist Alternatif (CWI Turkey)   (Click to enlarge)

For workers' unity against war, terrorism and racism

Tory Chancellor George Osborne argued spuriously on the Andrew Marr TV show that if Parliament doesn't authorise the bombing of Isis in Syria, it would be a "publicity coup" for Isis. In this kind of way, stepping up the military onslaught is presented as the only option. But as British missiles won't decisively change the scale of those already raining down on Isis from the US, French and Russian air forces, why the fervour of Osborne, Cameron and Co?

The answer lies in Osborne's comment that a defeat for the government over air strikes would send "a terrible message about Britain's role in the world" - ie it would mean a loss of prestige internationally for the British ruling class.

They are also exploiting fears and aiming a message at their domestic audience: to appear to be acting to defend people from terrorism. After the Paris atrocities, not having any real answers on how similar attacks can be avoided in Britain, their mission is to contribute to the 'shock and awe' in the skies over Syria. "Britain has never been a country that stands on the sidelines and allows others to defend us", was Osborne's hype.

In addition, they want to counter any negative effects on the British economy of the Paris attacks - there was a fall in the number of people out shopping and visiting tourist attractions following the attacks.

To uphold the interests of big business and bolster 'confidence', the government tries to create an illusion of safety through declaring a new offensive, plus allocating extra funding to 'security' measures.

With the background of this propaganda and accompanying barrage in the media - declaring that bombing Isis is the only route to providing security - a recent ORB poll for the Independent showed 71% support for air strikes on Isis in Syria, up from 67% in July. A small majority even said that ground troops should be sent into Syria against Isis.

However, the poll also showed that 64% believe that Britain would be safer from terrorist attack if the Blair government hadn't been to war on Iraq and Afghanistan. Likewise, extending Britain's military action now from Iraq to Syria will make terrorist attacks on British targets more likely in the coming weeks and months.

Mary Dejevsky, in a column in the Guardian, reminded readers that just before the Paris attacks the UK foreign affairs select committee had published a report opposing military intervention in Syria. She commented: "In some ways the arguments are even more compelling now. It should not be cowardice to suggest that these include the greater risk of attacks at home".

Foreign military interventions by western governments also increase the risk of attacks on western targets abroad, as was indicated in the terrorist attack last week in the Radisson Blu hotel in Bamako, Mali. This atrocity was not unrelated to French imperialism's history of interventions in Mali and elsewhere in north Africa.

In any case, while bombarding Isis can weaken it, it cannot remove it completely. The US-led coalition has conducted 8,000 air strikes on Isis in just over a year but this hasn't dislodged Isis from most of its territory.

Even a ground invasion wouldn't destroy it totally, as the failure to wipe out the Taliban in Afghanistan has shown. As has previously happened, forces like Isis could mutate into another jihadist organisation. And ground forces would open up the prospect of becoming embroiled for a long time with no ultimate success, as the wars on Iraq and Afghanistan demonstrated - which is why none of the imperialist powers are proposing this regarding Syria at present.

In the aerial assaults the bombs are inevitably also hitting the civilian population. Their terrible plight will lead to more anger among Sunnis across the Middle East towards the intervening powers and more recruits for the jihadist organisations. Raqqa is being particularly hit, a city of 350,000 people, whom Isis tries to prevent from fleeing.

Also, degrading Isis militarily will do nothing to counter its ideology or standing in the eyes of those it attracts.

On the contrary, a layer of Muslim youth worldwide can gain the impression that it is in the frontline of resistance against the imperialist powers and has 'victim status'.

Many youth who have travelled to join Isis have been motivated not primarily by ideology but by viewing it as the most successful jihadist organisation against the Assad regime's mass terror and destruction.

Both the bombing of Isis and the attacks on civil liberties in Europe - which will impact particularly on Muslims - will increase anger and alienation in a layer of Muslim youth and continue to draw a small minority of them towards the likes of Isis. 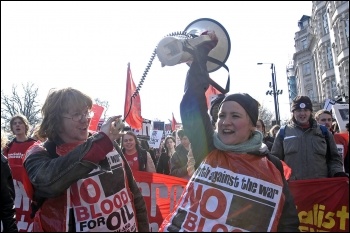 The capitalist powers intervening against Isis all have dissenting voices. For instance, right-wing former French prime minister Dominique de Villepin voiced opposition when he said that by bombing Isis "we legitimise their claim to be at war... we shouldn't fall into the trap of outbidding them".

Nevertheless, the hypocrisy of western governments knows no bounds. Isis itself is a product of the military brutality that was meted out to Sunnis during the US-led occupation of Iraq.

The friends of western imperialism in the Middle East include the autocratic Gulf elites and Turkey's regime - all of which have had involvement in backing Sunni militias in Syria and Iraq to counter the Iran-influenced Shia axis.

The regular atrocities committed in the Middle East by many of those militias - and by Shia sectarian forces - are given relatively little attention by the western powers. But when jihadists commit terrorist acts on western soil or against westerners elsewhere in the world it is another matter.

Meanwhile, while Muslims in the Middle East suffer greatly at the hands of Isis and other reactionary forces, the constant blaming of Muslim communities in the right wing media in Britain helped to fuel a 300% rise in attacks on Muslims in this country in the week following the Paris attacks - especially on women.

In addition, Muslims, and also refugees, are among the worst hit by the increased 'security' measures imposed in reaction to the terrorist attacks.

In France, President Hollande has again stolen the clothes of the right in his extension of a State of Emergency to last three months. This encompasses repressive measures that include powers for the army in civilian spaces, permitting the police to enter and search homes without a warrant and powers to block internet and social media.

Also ominous is his banning of public gatherings, including two planned demonstrations against climate change and the election rallies for December's regional elections.

Recent polls in France show majorities in favour of these measures. But the questions are posed in a biased way; typical was one that asked if people supported: "measures to restrict liberty of individuals to preserve the liberty of all".

In Belgium too, a raft of 'emergency' measures was announced, including that suspected jihadists returning from Iraq and Syria will be automatically imprisoned and converts to 'radical Islam' can be tagged. Brussels was virtually shut down for several days, with all schools, universities, metro lines and shopping centres closed.

On the borders of Europe's 26-country Schengen zone extra entry checks have been imposed. These won't stop determined terrorists, but will spell delays for everyone entering, result in particular victimisation of Muslims, and an even more disastrous situation for refugees escaping wars.

In Britain billions more pounds are being given to the armed forces and intelligence services, which will be at the expense of public services, and plans are being made for a greater military presence on the streets in the event of threats.

Understandably, measures that would really stop terrorism would be very popular. However, none of these changes will do that and they will all reduce civil liberties and can in the future be used against workers' struggles on workplace or political issues.

The police in these countries already had abundant powers to arrest anyone suspected of crime. From a right-wing standpoint even the Times argued that the "central problem thrown up by the Paris attacks was not so much the paucity of police powers as the failure and neglect of institutions in spotting looming peril" and warned against measures that would be "eroding freedom".

Jeremy Corbyn has expressed opposition to bombing Syria. But one difficulty he has is that he has criticised the idea of military intervention taking place without backing from the United Nations.

Previously, regarding war on Iraq or Assad in Syria, anti-war politicians could cite the need for UN backing in the knowledge that it would be vetoed by Russia and China.

However, Isis's recent bringing down of a Russian plane and killing of a Chinese hostage shifted the attitude of those two governments. So the UN security council unanimously supported a French resolution calling for "all necessary means" against terrorist attacks, which is being taken as tacit backing for air strikes by many British MPs.

The UN is not an independent body arbitrating disputes between nations. It is primarily dominated by the big powers and acts in their interests. After all, the US-led Korean War (1952-53) was fought under the UN flag; and cruel sanctions against Iraq in the 1990s were carried out under UN auspices - which led to up to half a million deaths.

Also, faced with threats of resignations and disunity from within his shadow cabinet, Corbyn is unfortunately heading towards allowing Labour MPs a free vote on the issue of bombing Syria, despite previously saying he would apply the whip.

A free vote is almost certain to give Cameron a majority. John McDonnell contributed to this likely climbdown by saying publicly that Labour MPs should have a free vote.

This is yet another consequence of Corbyn and McDonnell placing 'party unity' - ie allowing the right-wing to call the shots - above boldly taking steps to transform their party in a leftward direction.

Corbyn will face issue after issue on which the Labour right will seek to force him back. To keep the support that thrust him into the leadership position and to build on it, he needs to stand firm and use that support to bolster his position and push forward a process of building a mass pro-working class force.

Right-wing Islamist ideology only gains some traction in today's crisis-ridden capitalist societies because of the absence of democratically run mass parties based on working class unity and interests.

The building of such parties is the only route to removing the causes of terrorism and war, through clearly putting forward a socialist alternative to capitalism.