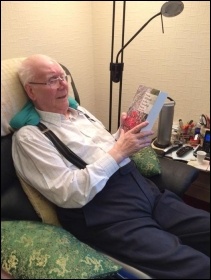 It is with great sadness that we announce the loss of our friend and comrade Roger Priest. Roger was born in the East End of London into a large catholic family. His father was an active socialist in the Labour Party and Roger followed in his traditions.

Roger became active in socialist politics after World War Two, becoming an active member in the Young Communist League and the Labour Party at the same time. He would proudly talk of the times he went canvassing with David Attenborough and the people who were involved in socialist politics at the time, and was proud to be distributing leaflets that proclaimed socialism.

Roger had been evacuated to Chinnor, Oxfordshire during the war, and when he was conscripted continued to propagate the ideas of socialism, finding that while some of the officers would have it in for him, there were others who were sympathetic to these ideas.

Roger returned to the Chilterns and became father of the chapel (trade union branch secretary) at Hazel, Watson and Viney, a large printing works that printed Reader's Digest among other publications. Here he won 'fish and chips Friday' and terms and conditions that were the best in Buckinghamshire. On one occasion, he and the stewards won up to £3,000 in back pay, which he said was enough to buy a house in the area at that time.

Roger continued in the print trade and set up his own business; during the anti-poll tax campaign he printed thousands of leaflets. He was elected to the council for Labour, and also stood as a parliamentary candidate for Buckinghamshire.

Roger was always a man to speak his mind and a man of principle, with a firm belief in the ideas of socialism and the need for a socialist economy. He had always been involved in the peace movement and was a strong advocate against war. When Tony Blair took the UK to war in Iraq, he resigned from the Labour Party but remained active in local politics and the fight to fully fund the NHS.

It was during an NHS meeting that Roger and I met. We agreed to set up 'Bucks save our services' and Roger agreed to join the Socialist Party, and never looked back. He stood as a Trade Unionist and Socialist Coalition (TUSC) candidate in the local elections and was a proud member of the Socialist Party in his later years, making sure that his carers always went away with a copy of the Socialist and the knowledge that there was a local union branch for them to get involved in. Despite his recent ill health and Covid, he was always asking about meetings and how the party was doing both nationally and internationally.

Roger was also active in the charitable sector, and set up many projects predominantly supporting young people. This was recognised with an MBE, a title he only used when he thought it would help get a young person a job or access to housing.

He leaves behind family and many friends and our thoughts are with them at this time. He will not be forgotten, and I will miss the many tales he had of his political life and the experiences that resulted from this.