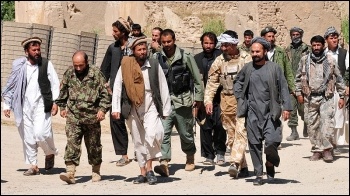 Some Taliban fighters had turned themselves in, 2010. Photo: isafmediaCC   (Click to enlarge)

Thousands of fearful residents, many with bitter memories of the last Taliban regime, tried desperately to board planes to flee the hardline Islamic force. Ghani had already flown the coop.

After decades of a western imperialist military occupation backing up puppet regimes in Afghanistan, Kabul fell without a battle. Such was the lack of support for the rotten Ghani regime among the population as a whole, and the deep unpopularity of western troops on the ground.

Clearly, there is no strong appetite for the return of the rule of the Taliban in Afghanistan by the majority of Afghans, expressed in recent anti-Taliban protests.

The Taliban draws support mainly from the Pashtuns, who make up 42% of the population, and have been very hostile to the Persian-speaking Tajiks, who make up 27%. However, the Taliban have exploited the demoralisation of much of the masses at their atrocious conditions - 54% of Afghans survive on just $1.90 a day - as well as the huge anger at corruption.

The hardline Islamists promise to deliver the 'law and order' and 'security' which is yearned for by so many. However, it remains to be seen what their version of 'peace' will be.

The fall of Kabul is a devastating blow for the US, and for all the powers grouped under Nato, which invaded Afghanistan in 2001. It is a humiliating debacle for western imperialism.

The television images from Kabul of desperate, tearful residents blows away the idea, carefully promoted by capitalist ideologues since the collapse of Stalinist regimes in the former Soviet Union and eastern Europe, that US military power was unstoppable and could impose a 'New World Order' everywhere.

The 'nation building' plan for Afghanistan lies in ruins, as the Taliban return to power just short of the 20th anniversary of the 9/11 attacks on the US.

From Tony Blair to Boris Johnson, successive British governments played their bloody part in creating this catastrophe for the Afghan people. Colonel Christopher Kolenda, advisor to three generals who served in Afghanistan, says that regime corruption was rampant from the beginning of the puppet Karzai government in 2001, which was "self-organised into a kleptocracy."

According to local civil rights activists, 100,000 Afghans died during the 20-year occupation. Opium production increased hugely, and now accounts for 90% of the global heroin market. One-in-ten young Afghans are opium addicts. And life expectancy is eight years lower than the world average.

The western occupiers were under huge pressure to deliver on their promises to transform education, healthcare and women's rights. And while there were some improvements, they were "dogged by endemic corruption and insecurity" (Financial Times).

For weeks before Kabul fell, the Taliban captured swathes of Afghanistan, facing little resistance. The Afghan national army was not prepared to fight and die for the very unpopular and repressive Ghani regime.

Like all institutions under the US's puppet regimes, the Afghan army was riddled with graft, corruption, waste and mismanagement. In many cases, soldiers were semi-starved and poorly equipped. From an early stage in its creation, the Afghan army was infiltrated by Taliban supporters.

Provincial warlords made deals with the advancing Taliban and did not rally to the 'lost cause' of the beleaguered Ghani government, even in the traditionally anti-Taliban north of the country. Only one warlord, Ahmad Massoud, now holds out in the mountainous Panjshir area, linking up with the deposed vice-president. Whether they intend to rouse a serious military opposition or negotiate with the Taliban remains to be seen.

With the arrival of the Taliban in Kabul, fear and terror has gripped many residents. When the Taliban last ruled Afghanistan from 1996 to 2001, they imposed their strict interpretation of Islamic law, which entailed banning women from being educated or working, stoning women accused of adultery, and public executions.

In the period running up to their victory, the Taliban have indicated they will 'moderate' their rule. Taliban leaders are in discussions with Karzai and other Afghan 'leaders' over the formation of an "open, inclusive Islamic government".

At a press conference, the Taliban promised "no retaliation" against opponents - despite carrying out door-to-door searches for former regime officials and those who worked with Nato forces.

The Taliban are anxious to avoid direct clashes with western imperialism as they consolidate their rule, emphasising that Afghanistan would not be used to launch terror attacks, even though some of the Taliban's component militias are closely associated with al-Qa'ida.

They claimed that women would have rights but ominously added this would be within their interpretation of Islamic law.

How much of this is window dressing by Taliban leaders remains to be seen. "At the start of this transition [to power]", the veteran Independent correspondent Patrick Cockburn comments, "it may be in the interests of the Taliban to show a moderate face and not stir up opposition at home or abroad by public executions and beatings".

An additional factor is that according to the Economist, the Taliban, "lacking technocrats or mangers", declared a general amnesty for all government officials. For the Islamic group "the priority is to keep the existing state going."

Yet even a supposedly 'moderate' Taliban regime, or one involving corrupt politicians like Karzai, will be deeply reactionary and oppressive towards women and others.

Their lightning victory does not mean the Taliban has deep roots and universal support throughout the country. Afghanistan is made up of various ethnic and tribal groups, including Tajik, Uzbek and Hazara peoples, and the Pashtun, from which the Taliban draws most support.

The Taliban will have to try to reach agreements with many of these groups if it is to stay in power. If they fail in this aim, the way could be open for renewed conflict and another round of bloody civil war, with the country possibly breaking up.

An upsurge of Islamic terror attacks arising from the Taliban's victory is plainly a pressing concern of regional and western powers. But the Taliban may try to rein in or contain jihadist Islamic forces from using Afghanistan to plot attacks that could invite western military assaults.

Nevertheless, Western governments express concern about a new spike of domestic terror attacks, as the Taliban victory acts, at the very least, as a spur to various Islamic terror groups around the world, conveniently ignoring that the US and UK armed and assisted al-Qa'ida and other Islamic terror groups in Libya and Syria against the Gaddafi and Assad regimes.

The western powers are now desperately scrambling around in response to the Taliban's coming to power, trying to find if there is any modus operandi they can have with the new rulers in Kabul. After all, they count the repressive Saudi Arabian regime as an ally.

Since former US president Donald Trump made his 'deal' with the Taliban, and current president Joe Biden announced the full departure of all US forces by 11 September, the US had pushed for an agreement by Afghan parties, involving the Taliban, during failed talks in Doha.

Clearly, the western powers can live with reactionary, anti-women and anti-working class Islamic regimes, such as their close allies in the Gulf States, as long as they do not stand in the way of their vital interests regionally or globally.

The 'war on terror' was merely the pretext for the imperialist invasion of Afghanistan in 2001. After all, the creation of al-Qa'ida arose from the US's backing of the Mujahedeen fighters against Soviet Union forces in Afghanistan during the 1980s. The occupation of Afghanistan by western forces in 2001 was a crucial part of the efforts by the US, and other coalition partners, like Britain, to enhance their influence and control of central Asia.

The Taliban's victory will have far-reaching repercussions. An immediate effect can be a new wave of refugees, destabilising the neighbouring countries and eventually affecting Europe, as well. Already the Greek and Turkish governments have moved to block their land borders to prevent a new wave of Afghan refugees.

The Taliban's assumption of power is a boon for neighbouring Pakistan's military and intelligence services, which have very close ties to the Taliban. For decades, Pakistan served as a base for Taliban leaders.

However, the Pakistan government will now be faced with a destabilising and unpredictable regime on its borders. And the outlawed Pakistan Taliban (TPP) will be emboldened in the "largest failed state in-waiting" that is also nuclear armed.

China and Russia will be glad to see the back of western forces from Afghanistan and the chance to increase their influence in the region. China wants stability, which will enhance its 'new silk road' in central Asia, and an agreement with the new Kabul regime to rebuild Afghanistan's shattered infrastructure.

But both China and Russia will fear that a Taliban-run Afghanistan could act as an impulse to secessionist Islamic minorities in their countries and spur on domestic terror attacks by Islamic terror groups.

While the events in Kabul represent a serious blow to the prestige and influence of the US, Nato and western imperialism, the working class and poor of Afghanistan are left with the dire consequences of decades of occupation and now the return of the Taliban.

There is nothing remotely progressive about the Taliban or the warlords and tribal and ethnic leaders with whom the Taliban will try to find agreements in order to rule. And the Afghan people are not entirely rid of bloody western intervention; the US's new 'permanent special military unit', in Kuwait, staffed by 2,500 troops, can be used to launch air attacks in Afghanistan.

However, the Afghan masses will eventually have the last word on events. Already demonstrators in several Afghan cities have braved vicious repression in anti-Taliban street protests, including flag waving marches on Afghanistan's 'Independence Day' - 19 August.

The CWI has always argued that independent self-organisation and action of the working class is essential in Afghanistan.

This entails building mass organisations of the working class and poor, with a programme for fundamental socialist change, that struggles for power to end the nightmare of wars, invasions, poverty and oppression.

Such a road is clearly fraught with difficulties, but ultimately either the working class and its allies must prevail or it is a future of barbarism.

The Committee for a Workers' International (CWI) is the international socialist organisation which the Socialist Party is affiliated to. The CWI is organised in many countries. We work to unite the working class and oppressed peoples against capitalism, and to fight for a socialist world.