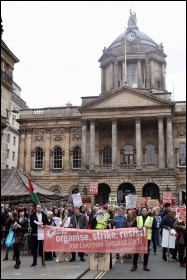 Just hours before the Electronic Warfare event was due to open in Liverpool, Merseyside police set up a 'dispersal zone', covering the two days of the event. It gave the police the power to order people to leave the area, under threat of arrest. Police also have the power to seize people's property in the 'zone'.

Despite the police action, several hundred people gathered in the half light at 7am and marched towards Exhibition Centre. The protesters held an impromptu rally when the police would not allow us to proceed any further.

Socialist Party member Dave Walsh is chair of the Liverpool Trades Union Council. When he spoke, he pointed out that all the Labour councillors in the city had voted for the arms fair.

The arms fair has been opposed by trade unions including Unite, the National Education Union (NEU) and Unison. The Tory party conference announced further restrictive measures on the right to protest in response to Insulate Britain blocking motorways. But it is clear that such repression will be directed against working-class and left-wing organisations.