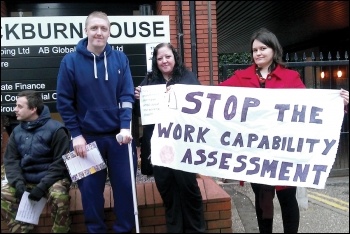 Capita is one of the outsourcers which managed the DWP's notorious 'work capability assessments', photo by Pete Mason   (Click to enlarge)

Shares in outsourcing giant Capita have collapsed following the company's profit warning to shareholders. This follows shortly after its competitor Carillion sank into liquidation, and underlines further the fragile state of British capitalism.

Shares fell by more than 47%, resulting in enormous profits for hedge funds who had sold them 'short' - essentially betting on misery for Capita's workers and small business suppliers. Shares in Serco and other outsourcers also fell significantly, reflecting a wider malaise.

Despite the collapse, the company appears to have avoided bankruptcy, with emergency measures to halt dividend payments and issue £700 million in additional shares. Management is also drawing up plans to 'cut costs' - no doubt meaning attacking workers' jobs, pay and conditions.

This may provide bosses temporary respite - at the cost of the workers who make them their money. But it will not solve the problems of a company with over £1 billion of net debt suffering from decades of underinvestment.

Like Carillion, part of Capita's problems stems from austerity - cuts in public budgets mean outsourcing vultures are competing to do more with less. Although the main impact of this corner-cutting is on workers and service users, it shows the short-sightedness of austerity even from the bosses' blinkered point of view.

Meanwhile, the Tories have had to bring forward the end of Stagecoach and Virgin's contract to run the East Coast railway - again. After cutting it from 2023 to 2020 in November, it will now end in months. The government may end up running it directly.

And more problems are looming for the outsourcers. After years of pumping in cheap credit to try to restart the economy, central banks are now increasing borrowing costs. This will only cause more bankruptcies.

Panicked traders have already responded to interest rate hikes and fears of asset bubbles bursting by wiping $4 trillion off global stocks in a week.

Britain's ruling class is desperately trying to avoid these tremors becoming a generalised economic crisis. Banks and the state scrambled to put together £325 million of support for Carillion's small suppliers. It's a fraction of the firm's liabilities, but reflects the banks' own precarious position and fear of further insolvencies.

The government in turn is trying to reprivatise services rescued from Carillion - but offers no guarantees for workers and most small business creditors.

The Tories may have only temporary relief regarding Capita. If bankruptcies come to spread throughout the outsourcing and construction sectors, they would be facing another deep recession.

Carillion employed 20,000 workers in the UK and Capita employs 50,000. Hundreds of thousands of working and middle class people would be directly affected by Capita going under. We demand bailouts for workers - the bosses have had plenty already.