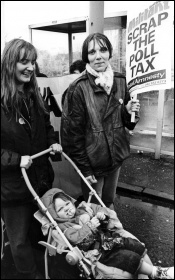 I used to think Militant were the bad guys. I joined the Labour Party in 1995 as a 20-year-old student. Most if not all of Militant (then in Labour, now called the Socialist Party) had already been expelled or had resigned from Labour.

Blair was already in charge, and all I could see was that we were finally going to be rid of the Tories. I thought Labour was still a socialist party - my political knowledge and history were not enough for me to think otherwise.

Labour swept to power of course, and I proudly carried my membership card with the new 'Clause Four' printed on its reverse. I did not appreciate the significance of what it had replaced.

When, with other Labour Party members, I first saw footage of Neil Kinnock's famous speech delivered to the 1985 party conference, which I had been too young to recall from the time, I cheered with the rest of them. Militant had been wreckers, stopping Labour from being able to achieve power and to help the people that really needed it.

That is what I was led to believe, and I bought into it. This hugely embarrasses me now.

I had visions of perhaps forging a career with Labour when I left university in 1998. Instead I went into local government, where I have mostly worked ever since. It was through my work in local government that I first discovered for myself that the Labour Party was not so different to the Tories.

In my first three roles, I worked in Labour-controlled authorities under a Labour government. The cuts were arguably even more severe in the late 1990s to mid-2000s than now, as there were more services to slash or privatise, and more workers to make redundant.

I became active as a rep in my union, helping members facing bullying and harassment and 'performance management', the rising number of disciplinary cases at the hands of bosses. We struck over pay and pensions and detrimental changes to our terms and conditions. And we saw valued colleagues leave through redundancy, or simply because they had had enough.

I finally left the Labour Party and joined the Socialist Party. My story appeared recently in the Socialist (see socialistparty.org.uk "Why I joined: I already feel as if I am finally home").

I have certainly learned a lot about the history of Militant from my new comrades over the past few months. I would like to think that had I been in the Labour Party in the 1980s, I would have been one of them.