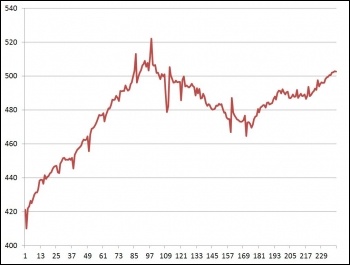 Average wage levels in the UK have, for the first time, recovered to the level they were at before the financial crisis. In the last quarter of 2019, the Office for National Statistics says weekly pay averaged £512 - the highest level since March 2008 with inflation taken into account.

For the Tories in their Westminster bubble, this is a statistic to shout about. (Under)employment minister Mims Davies hailed "a record-breaking jobs market and business confidence on the rise." For ordinary working-class and many middle-class people, however, the reality is very different.

Today's average wages would have been £650 a week had the pre-crisis trend continued, according to the Resolution Foundation think tank. So really we're still behind. And any average figures are artificially skewed upwards by a small number of people receiving obscenely high salaries.

The minimum wage is currently set at £8.21 an hour for workers aged over 25, due to rise to £8.72 in April. A 2019 report by the Joseph Rowntree Foundation estimates that a single person needs an annual wage of £18,800 (plus public services and benefits) for a minimal living standard.

However, the same person working full-time on the £8.72 rate would make just £15,870 before deductions. And that's not even taking the reduced rates for workers aged under 25 into account.

While the bosses try to make the working class pay for the crises of capitalism, the rich continue to line their pockets. Just since 2014, shareholders of the largest 100 companies in the UK have received a 56% increase in dividends, according to the Trade Union Congress.

If the minimum wage had increased at the same rate over that period, it would now be £10.14 an hour. Even this would not be enough.

Big business will always put its own profits ahead of our living standards, but workers are fighting back! McDonald's workers in London have struck for a wage of £15 an hour. Workers at Uber, Deliveroo and TGI Friday have also organised action.

University workers in the University and College Union are currently striking over a number of issues including low pay and insecure contracts. Posties in the Communication Workers Union could soon join them.