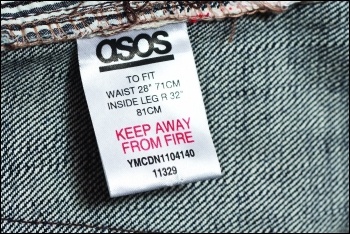 Workers at the warehouse of fashion retailer Asos are unable take toilet or drink breaks, in fear of not meeting their targets.

A three-month investigation by reporters at Buzzfeed revealed the shocking conditions.

Due to the increasing amount of pressure put onto the workers, one began experiencing panic attacks. This resulted in the termination of her employment at the Barnsley warehouse.

Other workers have commented on management deducting 15 minutes of pay even if they are only one minute late. The warehouse runs on a culture of fear.

With three and a half years of experience working on a minimum wage, zero-hour contract, I - and many people around me - have had very similar experiences to the Asos workers. The supposed 'flexibility' of working a zero-hour contract is a facade for the great anxiety and instability it inflicts on workers.

Colleagues of mine have been forced to look for other work as their hours were reduced to zero, with the fitting name of 'death by rota.' Due to our dependency on work and our complete expendability in our employers' eyes, they feel they have complete power over us.

Are we really consenting to work? Or are we coerced?

What workers need is strong workplace organising, and a political voice. Collective action like strikes shows the bosses we're not so expendable as they think, and can win big improvements. And a party that fights for workers could ban zero-hour contracts.