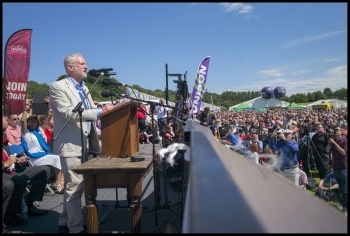 Corbyn's manifesto offers a glimpse of jobs, homes and public services for the 99%, protection for our environment - and making the capitalist class pay. No wonder the boss class and their representatives in politics and the press attack it - they will do anything to prevent a Corbyn victory.

Since the 1980s, the top 0.1% have doubled the proportion of total wealth they own to around 10%! Corbyn's manifesto threatens their gargantuan profits. The Tory manifesto, on the other hand, shows that, in reality, they want to maintain inequality and defend the interests of the billionaires.

But whatever happens in the election, the ideas raised in this manifesto will be part of the struggle to end austerity.

Young people facing an average of £54,000 student debt will be able to vote for free education. The five million people suffering zero-hour contracts will welcome the chance to vote for them to be banned. Young workers will welcome the rise in the minimum wage to £10 an hour with no exemptions - although the Socialist Party believes that to end in-work poverty, this needs to be raised to at least £12 an hour, as a step towards £15, with trade union struggle.

The housing market has led to crisis - one in three young men and one in five young women aged under 34 years old cannot afford to move out and start their own lives and families. 125,000 children are in homeless families. All those affected will welcome the commitments on mass council-house building and introducing rent control.

In a number of ways, this manifesto builds on the 2017 version. This time, council homes are defined by social rents linked to local incomes, not market rents. The 2017 commitment to rent control has been replaced with plans to implement caps.

The 2017 manifesto committed a Labour government to reforming and redesigning the brutal Tory Universal Credit. Around 80% of people moved onto Universal Credit get into rent arrears before they get their first housing benefit payment - a major factor in rising homelessness. In 2019 "Labour will scrap Universal Credit".

The manifesto takes steps towards addressing the urgency of climate crisis, with the welcome commitment to a million green jobs, with training, retraining and trade union conditions.

In the main, the emphasis on funding comes from taxing the rich. This is necessary - but not enough. The £83 billion in spending could be more than covered by the estimated £100 billion plus lost each year in tax evasion and avoidance - mainly by the richest. But they go to enormous measures to hide their money.

To deal with the capitalist class's inability to meet our needs, solve our environment's problems and provide a future, the working class needs to take power out of their hands.

As in 2017, this manifesto makes very welcome steps forward on nationalisation - of rail, mail, utilities. While these remain modest compared to previous Labour manifestos, they go far beyond anything we've seen the early 1980s.

This time the manifesto includes the provision of free, nationalised broadband.
But nationalisation doesn't go down well with the Financial Times (FT), a newspaper of the capitalist class, whose editorial wrote: "to extend nationalisation to the energy utilities, broadband and Royal Mail is an unwarranted interference which will shatter confidence and deter investment." What is unwarranted is running our public services for profit. Corbyn's commitment to "end and reverse privatisation in the NHS in the next parliament" poses a threat to the Tories' plan to aid those capitalists who wish to follow in the footsteps of Richard Branson, who has got almost £2 billion worth of NHS contracts since 2013. 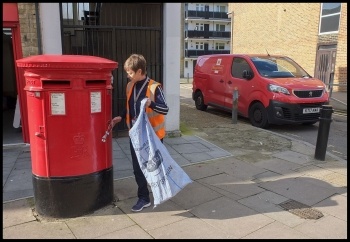 Labour has pledged to nationalise mail, rail and the utilities, photo Paul Mattsson   (Click to enlarge)

However, it is necessary to go further still. To solve the problems faced by both people and the environment requires more than just removing the profit motive from key planks of the economy - welcome as that is; it means removing the grip of big business from society altogether. To coin a still-relevant phrase of the economic crisis, big business and the banking system are a "great vampire squid wrapped around the face of humanity, relentlessly jamming its blood funnel into anything that smells like money".

Nationalisation of the top 150 companies that dominate the economy would provide the basis to begin democratically planning production, and the use of resources properly, without interference from the 0.1%.

Despite their warnings, professed fears, put-downs and sneers, big business knows these policies in the manifesto are popular and could propel Corbyn to Number Ten. That is why SSE, one of the Big Six energy companies, has already acted. SSE has moved its electricity distribution business to a Swiss holding company. The National Grid and water companies are taking similar measures.

The £30 billion National Grid wants us to fear nationalisation. A statement from it said: "Labour's proposals for state ownership of National Grid would be highly detrimental to millions of ordinary people who either hold shares in the company or through their pension funds - which include several local authority pension funds".

Jeremy Corbyn should answer them as the Socialist Party does; no ordinary people will suffer from nationalisation because compensation will be paid on the basis of proven need. Elected committees, accountable to the working class, could make the call. These companies' actions show that a Corbyn government will have to act quickly to combine this with measures to introduce capital controls and control of foreign trade to combat a flight of capital from Britain.

The capitalist class therefore hopes - in vain - that a defeat for Corbyn will kill off these ideas, once and for all. Their real fear, though, is that workers' confidence and aspirations will be raised by a Corbyn-led government which, in turn, could be pushed to go further than it initially intended by encroaching upon the capitalists' profits - and control.

The FT claims that, "if Labour loses it will be because the leadership was too ideologically inflexible to compromise with voters". But should that happen, it will be for very different reasons.

Millions will vote for Corbyn's policies in the coming election - as they did in 2017 when the anti-austerity parts of the manifesto netted around 3.5 million extra votes for Labour. But there are others who remain sceptical or feel politics is not relevant to their lives. It is a huge mistake that these manifesto proposals have been excluded from most Labour candidates' local leaflets - as in 2017. Unfortunately, this includes candidates backed by Momentum.

An appeal to "vote Labour" alone, or even an appeal to oppose the Tories, is not enough. Workers have voted Labour for years in council elections only to see them carry out Tory cuts.

An important way Corbyn could have shown he meant business would have been to instruct Labour councils to reject austerity and put the working class and youth first. He could have pledged to reimburse any Labour council which used its reserves and borrowing powers to provide bridging grants for Universal Credit claimants; to re-open youth services, Sure Starts and other cut services; to open genuinely democratic ballots on local regeneration schemes, and so on. In other words, show in action not words the difference a Corbyn-led, anti-austerity government would make.

It is established fact that press coverage of Corbyn is biased against him. Much of the barrage of smears and lies originates in the right wing of the Labour Party. Decisive action against the Blairites, starting with democratic mandatory re-selection, would have shown that he is ready to deal with the opponents of the working class wherever they exist, and help prepare Labour to be transformed into a vehicle for fighting for working-class interests.

As a result of not acting decisively, the anti-austerity message that was so popular in the 2017 election has been muffled. What's more, the Blairites remain in position, ready to act in the interest of capitalism and against the 99% beyond the general election - to prevent the anti-austerity manifesto being realised.

Mass rallies need to be called now to get the manifesto's message out, and as a way of preparing to fight for these measures after - whatever the election brings. It is correct that the manifesto commits to restoring and expanding workers' rights, to funding renters' unions, to supporting campaigns such as the 'Waspi' women, Grenfell victims and the Truth About Zane. Part of undoing the impact of Blairism and Tory austerity is to restore the understanding that organised collective action is essential for the working class to win.

The legal and working rights that workers have won were won in the workplaces, communities and streets - and only then were they made law. It was women workers at Ford Dagenham, for example, who won solidarity from the trade union movement through their strike that forced the then Labour government to write equal pay into law.

To defend the right to strike, the labour and trade union movement needs to support the postal workers' union CWU, that has been effectively banned from striking by the courts, despite a 97% vote for strike action by 76% of its 110,000 membership. Active support from Jeremy Corbyn would show what being on the side of workers actually means.

It is not by accident that an FT editorial compared Corbyn's manifesto to that of Francois Mitterrand in 1981. He came to power on a radical manifesto, but was forced into retreat within 100 days by sabotage from the French and international capitalist classes. The lesson from this is that, as much as we need a mass movement now to win the election, we also need a working-class-led movement and mass workers' party to fight for these measures afterwards.

That means transforming the Labour Party by restoring the central role of the trade unions and opening it up on a democratic federal basis to campaigners and socialists, to discuss and debate the production of a socialist programme and how to see it through against the capitalist attacks, which will increase a million-fold should Corbyn be elected. That is how we can transform hope into reality - a socialist reality.