Apple told to pay £11bn back tax: nationalise all the tax dodgers! 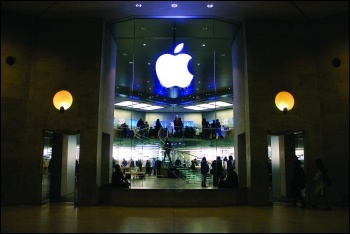 Tech giant Apple will have to pay back £11 billion it avoided in tax.

The Irish government had made a 'sweetheart deal' which the EU has now instructed it to overturn.

This move comes in the wake of Brexit, the mass working class revolt against the neoliberal EU establishment. It highlights the pressure the EU feels to make a show of taking on the capitalist interests it exists to defend.

Apple will of course resist and appeal this decision. Chief executive Tim Cook called it "maddening" and "disappointing" - although it's doubtful he will get any sympathy.

Here are some examples of what £11 billion could fund in Ireland:

The Irish state is quite happy to give leeway to big business and billionaires. But peaceful protesters fighting austerity face persecution by the 'justice' system.

The 'Jobstown 23' staged a sit-down protest against water charges around deputy premier Joan Burton's car. Incredibly, the Irish state is trying to prosecute them for 'false imprisonment'!

We say: no to dodgy tax deals! Nationalise tax dodgers and the top corporations under democratic workers' control and management. For a socialist plan of production to meet the needs of all, not enrich the billionaires.