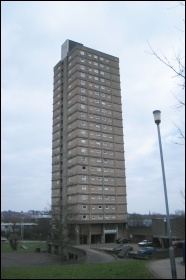 In the wake of the Grenfell Tower atrocity, Salford Socialist Party began discussing whether there is a role for tower blocks in a socialist housing policy. There were differing views so we organised a debate.

Matt Kilsby spoke first and in favour, arguing there are numerous great examples of well-built, well-planned high-rise living. Park Hill in Sheffield; Trellick and Balfron Towers and the Barbican and Golden Lane estates in London; Byker in Newcastle; Alton West in London - to name just a few.

Socialist town planning would be about need, choice, abundance, democratic control and variety.

And to discount high-rise living on the assertion it is somehow 'unnatural' seems misguided. The subsequent problems with a large number of post-war high-rise buildings have not been because of their design, building materials, and so on - or that they are somehow 'unnatural' places to live - but the fact that they've been left to rot, with no money spent on upkeep.

Paul Gerrard, opposing new tower blocks, pointed out that Marx analysed the contradictions of capitalism, including the antagonism between cities and the countryside. Accumulation of capital drives a concentration of labour into big cities, and tower blocks are capitalism's answer.

There is no objective need to house people at such levels of density, with a lack of privacy and nowhere for children to play.

Both speakers agreed that we oppose Sadiq Khan and other Blairites' attacks on older tower blocks, shedding crocodile tears over 'the mistakes of the past' to cover their own plans for privatisation and gentrification. In Salford, as in London and elsewhere, we demand and actively campaign for safe, high-quality council homes for all.