Tombland is the latest novel in the Shardlake series by CJ Sansom. It is a murder mystery set in the 16th century. There are no spoilers in this review about who the murderer was.

Israel/Palestine: Sixteen-year-old Ahed Tamimi and her 21-year-old cousin, Nur Tamimi, were arrested during a military raid on their house in the West Bank village of Nabi Saleh on the night of 19 December.

"What better whodunnit than how the ruling class came to power?"

Celebrated dissident Aung San Suu Kyi collaborates with military junta: She has long danced to the tune of western capitalism's interests, but may now be more influenced by the rise of China

"This is about the council trying to move the poor out of the city centre to create an image of prosperity and recovery in Bradford. But it's an illusion, the council are trying to make us believe that poverty doesn't exist here". 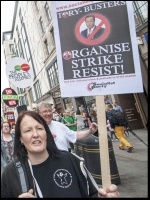 Corbyn under fire: To ensure the anti-austerity politics that have won Corbyn such support are not imprisoned within a few individuals in the leadership of the Labour Party, his supporters must get organised in every town and city of the country