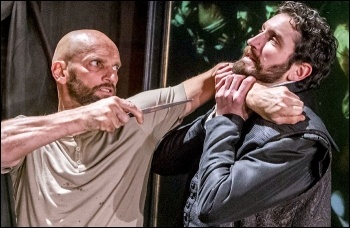 A new offering from left-wing playwright Anders Lustgarten might seem a surprising choice for the Royal Shakespeare Company to stage, but it's well worth the effort. 'The Seven Acts of Mercy' is a painting by the revolutionary artist Caravaggio, and this play explores its relevance to modern day Bootle.

Two Cities, two timelines, tied together by the lurking presence of the Catholic Church. Caravaggio (Patrick O'Kane) himself is holed up in the Pio Monte church, where the painting is still housed today. It is the Naples of 1606, following a brutal duel in which he has killed a man.

One part of the story concentrates on his cynical view of the world and his burgeoning relationship with his prostitute model Lavinia, while the political establishment seeks to silence his radical message. The other looks at the life of a retired docker with a terminal illness, Leon (Tom Georgeson).

Leon rails against modern capitalism while teaching his grandson Mickey to appreciate art and Everton FC. There's plenty to rail about in the world of food banks and the bedroom tax, but it is the question of housing that comes to the fore. They face eviction at the hands of property developers carrying out their work in the name of working class "aspiration," as one New Labour apparatchik describes it.

Amid this savage environment, neatly juxtaposed with the violence and brutality of seventeenth century Naples, Mickey sets out with his mobile phone camera to recreate the Seven Acts of Mercy. Visit the imprisoned, feed the hungry, refresh the thirsty, clothe the naked, visit the sick, shelter the homeless, bury the dead.

He hopes to show his grandfather that these seven acts exist in real life, not just art - with mixed results.

Caravaggio's work is full of action and energy, often emphasising working class characters. In 'The Crucifixion of St Peter', your attention is drawn to the sweated labour of those bearing the cross rather than the crucifixion itself. Lustgarten expresses the social conscience of the working class of Bootle with the same raw energy.

As the story develops, Leon's errant son and father to Mickey, now a "self-made man", returns to the fray, and his role in their recent life experiences becomes revealed. Among other scenes, their family divisions are exposed while watching the Merseyside football derby on TV, and a particularly funny episode where Leon compares all of the leading teams to various political parties.

The production has moments of great pathos as well as humour. There are strong messages about social housing and poverty, but also the violence and corruption inherent in class-based society both then and now.

It's unlikely this work will get the same exposure as 'I, Daniel Blake', for example. But for those who do get the chance to see it - the voice of the dispossessed speaks loud and clear, and the desire to rid the world of capitalist exploitation once and for all rings out for all to hear.