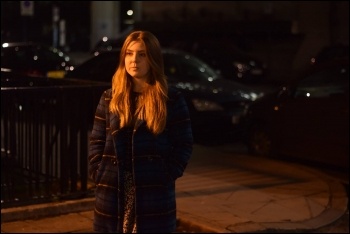 Amy Cousens describes casual violence in her contribution to the No Fear photoseries, photo by Mary Finch   (Click to enlarge)

"No one stopped to help me when I walked through the barriers at Leeds train station and a drunk man grabbed and pulled my hair. No one helped me as he then proceeded to shout 'slag' and 'bitch' at me across the station when I managed to free myself."

Every woman has a story like this. Amy Cousens, a friend and fellow Socialist Party member, told me this one. I've been trying to capture those experiences - of the endemic, systematic sexual harassment and assault of women - in a photography project titled No Fear.

Emilie Autumn, a musician poet, and author, writes in her book 'The Asylum for Wayward Victorian Girls' that in the US a woman is raped approximately every two minutes. A pedestrian is hit by a car in the US every eight minutes.

Theoretically, then, Emilie argues that a woman is safer walking in the middle of the road at night than on the pavement, because you're more likely to be harassed or assaulted than run over.

So I've been photographing women and non-binary people in the middle of the road at night to give expression to their anger, grief, fear and defiance. Everything that capitalist society ignores, and often actively tries to repress.

Overwhelmingly, those who come forward with allegations of sexual harassment or assault are not believed - the result being that most don't come forward at all. But women are breaking the silence, and art has been an essential part of this process.

Jen Brockman displayed 18 outfits in an art installation at the University of Kansas, each a representation of what a survivor had been wearing when they were sexually assaulted. Lying among jeans and shirts, dresses, and pyjamas, is a child's red dress.

Noa Jansma, a 20-year-old student from the Netherlands, spent a month taking selfies with her street harassers and sharing them on Instagram.

One of the most disturbing things about the project is the reactions of the men. None of them refused a photo, which Jansma correctly concluded "shows that these men honestly do not realise they're wrong, they think it's the most normal thing in the world."

I started my project for two reasons. First, I believe that regardless of whether it is political or not, art is one of the most valuable products of humanity. I am a photographer because I want to capture and communicate the beauty and complexity of human consciousness.

Second, I am committed, absolutely, to fighting for women's liberation and for a socialist world. Women's oppression is inherent in capitalism, so full liberation means fighting for socialism.

Art has an important place in that process. But political art - projects like Jansma's, Brockman's, and my own - cannot create the change it seeks without looking outwards, towards workers and struggle.

The capitalists might own the system, but workers run it - and we have the power to overthrow it.