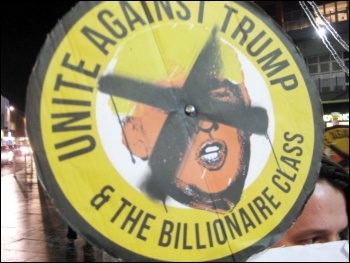 On 21 January, a sea of people, most of them women, descended on the US embassy in Grosvenor Square to protest against America's newly sworn in president.

The demonstration was organised in solidarity with the massive 'women's marches' that took place across the United States on the same day. These were the largest simultaneous protests ever recorded in US history. The Washington march alone numbered half a million.

While the American marches were most numerous, the mood for action went far beyond US borders. In a testament to the huge international anger generated by the inauguration of the sexist, racist, billionaire Donald Trump, the London march was 100,000 strong.

The protest was colourful, lively and determined. Grosvenor Square was packed out so rapidly that thousands waited for over an hour without being able to reach the start point.

The mood was angry, and certainly not pessimistic. Instead, there was an eagerness to discuss ideas. Socialist Party members taking part in the protest had hundreds of conversations about how we can support our brothers and sisters in the States and work to build a wall of resistance to Trump and his reactionary policies.

Also much discussed were the reasons for Trump's victory, which came despite his deep unpopularity. Crowds cheered speeches from the Socialist Party's open mic which laid the blame for Trump's victory not with ordinary Americans, but with complacent, big business-backed politicians whose neoliberal policies have left millions of Americans struggling to get by.

Hillary Clinton is one of those who falls into this category. After all, it was her failure to offer anything other than a continuation of the rotten status quo which allowed Trump the space to cynically pose as 'anti-establishment', despite being a paid-up member of the billionaire class.

It was disappointing, therefore, that the official platform at the end of the march included politicians cut from the same cloth as Clinton. Yvette Cooper, whose failed bid for leadership of the Labour Party was an indication of the popularity of those ideas here in Britain, was one of the keynote speakers.

But despite the lack of a positive direction from the platform, there was an overwhelming mood to continue the fight.

As the march dispersed, copies of the Socialist were snapped up. Marchers were keen to read reports written by Socialist Alternative (co-thinkers of the Socialist Party in the US) about the movement in America as well as the lessons that can be drawn for the fight against racism, sexism and austerity closer to home.

A protest was held in Coventry as part of international demonstrations against the inauguration of Donald Trump as president of the United States. Working class people are standing together in solidarity against the agenda of Trump, which seeks to divide ordinary people.

Earlier in the day Socialist Students at Warwick University initiated a protest as part of joint action between Socialist Students in the UK and USA, along with our comrades in the Sindicato de Estudiantes (Students Union) in Spain and CEDEP (Committee for the Defence of Public Education) in Mexico. 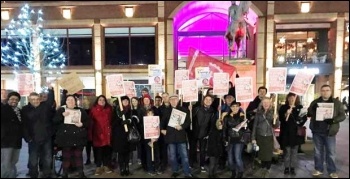 Speakers from Unison, NUT, Coventry TUC, Momentum and the Socialist Party all spoke in support of the growing global movement against Trump.

Socialists also outlined how the record of Obama and the Democrats in office helped pave the way for a Trump victory, while pointing out that Hillary Clinton was the favoured candidate of Wall Street and the 1%.

We need to fight not only Trump but the system that created him. The way to beat Trump and his ilk is through socialist policies that can challenge the rule of the capitalist system that sees 8 people own as much wealth as half the world's population. 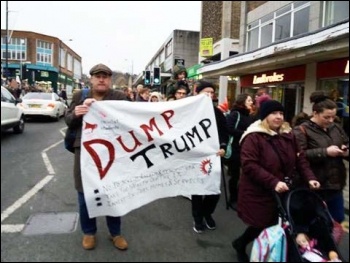 Around 1,500 people joined a march in Shipley held in solidarity with the Women's March on Washington taking place in the wake of the inauguration of Donald Trump as president of the USA.

The march was called by Shipley's 'Feminist Zealots' a reference to a derogatory comment made by local MP and Trump supporter, Philip Davies. While organisers said the demo wasn't about the Tory MP, a number of protesters brought placards aimed at him, as well as at Trump. The Feminist Zealots themselves organised a free cake stall - a gesture aimed in response to Davies' comments that "women want to have their cake and eat it".

Many of the protesters had come from Shipley itself, with others coming from nearby towns like Baildon, Saltaire, Silsdon, Yeadon and Pudsey amongst those I spoke to. Many expressed their anger at the way the comments of individuals like Davies and Trump can legitimise sexist behaviour.

Socialist Party members from Bradford joined the march, bringing our 'Dump Trump' banner along. We ran out of the several hundred leaflets we had printed, and also sold numerous copies of the Socialist. 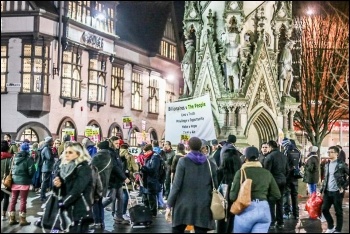 Despite freezing cold weather, more than 50 people gathered at the Clock Tower in Leicester on 20th January, to protest against the inauguration of Donald Trump.

Women of all ages were present, all expressing alarm at the prospect of an openly sexist and misogynist leader of the United States.

"Dump Trump - racist Trump! Dump Trump - sexist Trump!" was chanted, and speeches were given. The link between fighting sexism and capitalism was made by one protester:

"Trump's success was a failure of the Democratic party. Hillary Clinton openly represented Wall Street and big business rather than the interests of ordinary women. The movement around Bernie Sanders shows the mood for a socialist alternative to the current corrupt system".

Last Saturday, as part of a series of global protests against the beginning of Trump's presidency, around 1,500 people marched and protested through Leeds city centre to show their opposition to his misogynistic stance towards women and xenophobic rhetoric.

The march was comprised largely of women but also had support from a diverse mixture of Leeds residents and others from around Yorkshire.

The protest began with a large rally at the bottom of Briggate where the speakers, mostly women, attacked Trump's disgraceful comments about women and immigrants, and called for people to resist his presidency.

Amy Cousens spoke on behalf of the Socialist Party and made clear the links between support for Trump and the policies of austerity and cuts to public services carried out by the Obama administration.

Amy attacked Clinton, warning against 'lesser evilism', and argued that only grassroots working class organisation in America can stop Trump's pro-billionaire agenda. She put forward that the only way to defend women and immigrant communities is to organise and build a new party of working and middle class people in the US, armed with an openly socialist programme.

About 200 energised and angry women, men and children gathered at the Bargate in Southampton to protest against Trump.

One of the speakers - Maggie Fricker from Southampton Socialist party, said during her speech:

We are joining millions of women around the world who are angry at Trump's election. This is just the beginning of the mass resistance that is building against attacks on women's rights.

Women's reproductive rights in particular are being targeted by the reactionary right. Trump has promised to nominate a Supreme Court judge who has plans to destroy abortion rights in the US.

And around the world foreign aid will be withdrawn from any organisations who give women pregnancy advice - which will have a catastrophic effect on women's health.

This is only the start of mass resistance being organised often spontaneously from below. Last year saw huge protests around the world to defend and extend abortion rights.

Poland saw 100,000 women take to the streets dressed in black to force the government to u-turn on further restricting women's access to abortion. South America has also seen protests and campaigns for reproductive rights. And in Ireland the campaign to repeal the '8th Amendment' has really taken off.

Trump is the most openly misogynist, homophobic, racist president ever elected - on that we're all agreed. But I also want to say that Hillary Clinton is most definitely no sister of mine! She claimed to represent the interests of ordinary women but it became apparent during the election that it is to Wall Street that her real loyalties lie. We cannot rely on the rich to hand down what we need.

The resistance being organised now is about the 99% fighting for ourselves and to that end we need independent political representation. The corporate establishment of the Democratic Party has always acted in the interest of big business.

Women, workers, the poor and downtrodden, immigrants, refugees - we need to stand together, to organise, to protest, take strike action, to occupy, and so on - to demand and extend our rights.

[The above text is composed of extracts from Maggie's speech]

Also see photos at: CWI joins protests around the world against Trump

This version of this article was first posted on the Socialist Party website on 24 January 2017 and may vary slightly from the version subsequently printed in The Socialist.